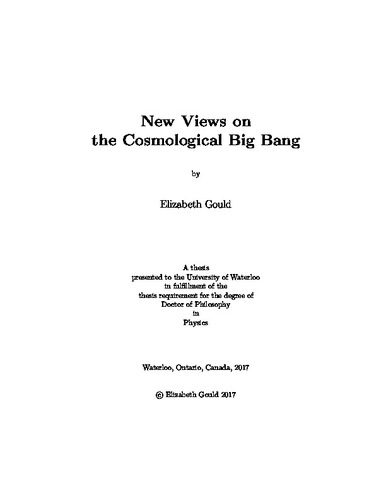 This dissertation is a collection of four different proposals to describe the early universe. Each will draw from insights of different areas of physics to suggest a description which differs from the standard inflationary paradigm. First we start with holographic cosmology in which cosmological predictions of the very early Universe are expressed in terms of the observables of a three dimensional quantum field theory (QFT). This framework includes conventional slow-roll inflation, which is described in terms of a strongly coupled QFT, but it also allows for qualitatively new models for the very early Universe, where the dual QFT may be weakly coupled. The new models describe a universe which is non-geometric at early times. While standard slow-roll inflation leads to a (near-)power-law primordial power spectrum, perturbative superrenormalizable QFT’s yield a new holographic spectral shape. Here, we compare the two predictions against cosmological observations. We use CosmoMC to determine the best fit parameters, and MultiNest for Bayesian Evidence, comparing the likelihoods. We find that the dual QFT should be non-perturbative at the very low multipoles (l ≲ 30), while for higher multipoles (l ≳ 30) the new holographic model, based on perturbative QFT, fits the data just as well as the standard power-law spectrum assumed in ΛCDM cosmology. This finding opens the door to applications of non-perturbative QFT techniques, such as lattice simulations, to observational cosmology on gigaparsec scales and beyond. We then turn to the suggestion that the universe repeats in cycles, with an infinite series of similar cycles in the past and the future. Here, we instead propose that the cosmic history repeats itself exactly, constructing a universe on a periodic temporal history, which we call periodic time cosmology. In particular, the primordial power spectrum, convolved with the transfer function throughout the cosmic history, would form the next cycle’s primordial power spectrum. By matching the big bang to the infinite future using a conformal rescaling (a la Penrose), we uniquely determine the primordial power spectrum, in terms of the transfer function up to two free parameters. While nearly scale invariant with a red tilt, using Planck and Baryonic Acoustic Oscillation observations, we find the minimal model is disfavoured compared to a power-law power spectrum at 5.1σ. However, extensions of ΛCDM cosmic history change the large scale transfer function and can provide better relative fits to the data. For example, the best fit seven parameter model for our Periodic Time Cosmology, with w = −1.024 for dark energy equation of state, is only disfavoured relative to a power-law power spectrum at 1.8σ level. Therefore, consistency between cosmic history and initial conditions provides a viable description of cosmological observations in the context of Periodic Time Cosmology. Next, we discuss the 5D holographic big bang model, a novel model for the emergence of the early universe out of a 5D collapsing star (an apparent white hole), in the context of Dvali-Gabadadze-Porrati (DGP) cosmology. The model does not have a big bang singularity, and yet can address cosmological puzzles that are traditionally solved within inflationary cosmology. We compute the exact power spectrum of cosmological curvature perturbations due to the effect of a thin atmosphere accreting into our 3-brane. The spectrum is scale-invariant on small scales and red on intermediate scales, but becomes blue on scales larger than the height of the atmosphere. While this behaviour is broadly consistent with the non-parametric measurements of the primordial scalar power spectrum, it is marginally disfavoured relative to a simple power law (at 2.7σ level). Furthermore, we find that the best fit nucleation temperature of our 3-brane is at least 3 orders of magnitude larger than the 5D Planck mass, suggesting an origin in a 5D quantum gravity phase. Finally, we turn to the status of locality in quantum mechanics. Motivations for violations of the notion of relativistic locality include the Bell’s inequalities for hidden variable theories, the cosmological horizon problem, and Lorentz-violating approaches to quantum geometrodynamics, such as Horava-Lifshitz gravity. We explore a proposal for a “real ensemble” non-local description of quantum mechanics, in which “particles” can copy each others’ observable values AND phases, independent of their spatial separation. We first specify the exact theory, ensuring that it is consistent and has (ordinary) quantum mechanics as a fixed point, where all particles with the same values for a given observable have the same phases. We then study the stability of this fixed point numerically, and analytically, for simple models. We provide evidence that most systems (in our study) are locally stable to small deviations from quantum mechanics, and furthermore, the phase variance per value of the observable, as well as systematic deviations from quantum mechanics, decay as ∼ (Energy×Time)^(−2n) , where n ≥ 1. Interestingly, this convergence is controlled by the absolute value of energy (and not energy difference), suggesting a possible connection to gravitational physics. Finally, we discuss different issues related to this theory, as well as potential novel applications for the spectrum of primordial cosmological perturbations and the cosmological constant problem.