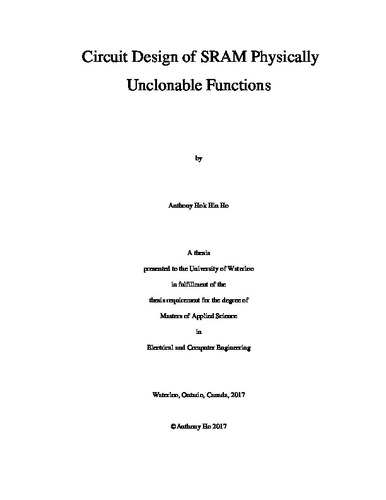 A Physically Unclonable Function (PUF) is an entity that reliably provides a unique response to a given challenge and cannot be easily duplicated physically. PUFs are an alternative to using non-volatile memory (NVM) for secure key storage. NVMs are susceptible to reverse engineering and side channel attacks that can extract sensitive data. PUFs take advantage of random physical variations that are introduced during manufacturing. PUFs can be used to create digital fingerprints as secret keys for cryptographic algorithms or for device authentication. SRAM PUFs, in particular, are of great interest due to their omnipresence in electronics. One of the weaknesses of SRAM PUFs is their reliability as noise and other environmental effects reduce the reproducibility of the PUF. This thesis provides an in depth analysis of the 6T SRAM PUF and 8T soft error robust SRAM PUF at the transistor level and provides a methodology to design a reliable PUF. We hypothesize that the VGS of pull up and pull down transistors during the power up phase affects PUF reliability. Transistors with a larger VGS have higher drive strength and more influence over the start-up value of the PUF. Changing the sizing ratio of PMOS to NMOS devices changes the VGS. Nominal simulations recorded VGS in relation to the VDD ramp-up to predict which devices have a higher influence on start up values. Two types of PUF schemes: VDD manipulation and GND manipulation are simulated. Monte Carlo simulations are performed within the Cadence Virtuoso environment using TSMC general purpose CMOS kit. The reliability metric is called the assured response which is the number of Monte Carlo samples that show a consistent response over 100 power ups. The results from VGS dependency analysis and isolated mismatch show a clear trend between VGS and the type of device that determines PUF reliability. Devices with higher VGS during VGS dependency analysis show a larger drop in assured response when their mismatch is disabled in the isolated mismatch simulation. Sizing sweeps show that skewed designs have higher assured response than less skewed designs. This is because smaller transistors have poor matching properties and relatively higher VGS which contribute to improved reliability. VDD manipulation and GND manipulation showed similar levels of reliability while 6T performed better than 8T. In an effort to improve the 8T PUF, a split VDD scheme is proposed which introduces a delay between two VDD signals in the cell. This shows a 3% improvement over a skewed 6T VDD design which was previously the best performer.