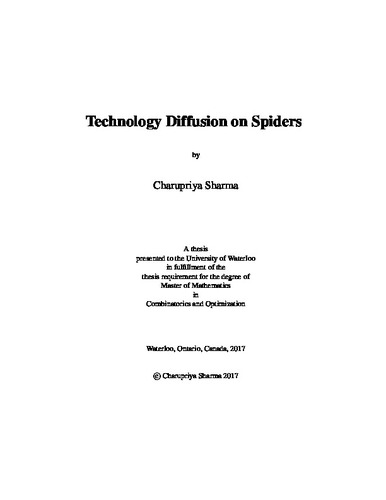 There has been significant research about cascade effects that occur when information is spread through a network. Most models of such cascade effects are highly-localised, which means that they assume a node’s behaviour in a social network is influenced only by its immediate neighbours. Goldberg and Liu (2013) argued that such models may not represent the information diffusion process in several real world scenarios accurately. They proposed the technology diffusion model, where a node’s decision to accept a new piece of information can be influenced by remote nodes it can communicate with. Formally, the technology diffusion model is defined as follows : given an undirected graph, G = (V,E), and a threshold function θ : V → {2, ..., |V|} on all nodes v ∈ V, a node v is considered activated whenever it becomes adjacent to a connected component containing at least θ(v) active nodes. The objective, referred to as seed minimization, is to find a minimum cardinality set of initially active nodes, called the seedset, that triggers a cascade that activates the entire graph. Efsandiari et al. (2015) showed that technology diffusion is NP-hard even on spiders (trees in which at most one vertex, called the root, has degree larger than 2). In this thesis, we show that the problem is polynomial-time solvable on spiders with a constant number of legs, i.e., spiders where the root has a constant degree. We also show that, in this setting, there is a linear program formulation for the problem of polynomial size. Finally, we initiate the study of the influence maximization version of technology diffusion, which seeks for a seedset of a fixed size k which maximizes the number of vertices eventually activated. Influence maximization problems of this kind have been studied extensively in localized diffusion models, and therefore it is natural to investigate the same question for technology diffusion models. We show that this problem is also solvable in polynomial-time on spiders with a constant number of legs.