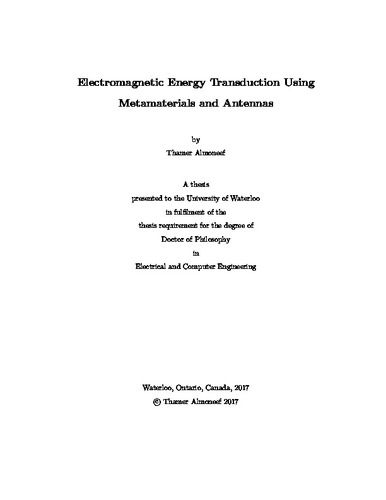 The advent of rectenna systems almost half a century ago has enabled numerous applications in a number of areas, with the main goal of recycling the ambient microwave energy. In previously presented rectennas, microstrip antennas were the main energy source used to capture and convert microwaves to AC power. However, the conversion efficiency of antennas have never been examined in terms of their capability of absorbing microwave energy, and hence any enhancements to the overall efficiency of rectenna systems were mainly attributed to the rectification circuitry instead of the antenna. In the first part of this dissertation, a novel electromagnetic energy collector is presented, consisting of an array of Split Ring Resonators (SRRs), used for the first time as the main electromagnetic source of energy in a rectenna system. The SRR array is compared to an array of patch antennas to determine the radiation to AC efficiency when both arrays are placed on the same footprint. Numerical simulations and experimental tests show that the SRRs achieve higher efficiency and wider bandwidth than microstrip antennas. The idea of electromagnetic energy harvesting using metamaterials is further explored by designing a metamaterial slab based on the full absorption concept. The metasurface material parameters are tuned to achieve a surface that is matched to the free space impedance at a certain band of frequencies to minimize any reflections and ensure full absorption within the metasurface. The absorbed energy is then channeled to a resistive load placed within each element of the metasurface. Different from previous metasurface absorber designs, here the power absorbed is mostly dissipated across the load resistance instead of the substrate material. A case study is considered where the metamaterial slab is designed to operate at 3 GHz. The simulation and experimental results show radiation to AC efficiencies of 97% and 93%, respectively. A novel method is proposed in the second part of the thesis that significantly increases the conversion efficiency of electromagnetic energy harvesting systems. The method is based on utilizing the available vertical volume above a 2-D flat panel by vertically stacking panels while maintaining the same 2-D footprint. The concept is applied to SRRs and folded dipole antennas. In both cases, four vertically stacked arrays are compared to a single array panel, both occupying the same flat 2-D footprint in terms of power efficiency. The numerical and experimental results for both the SRRs and the antennas show that the stacking concept can increase the conversion efficiency by up to five times when compared to a single 2-D flat panel. The third part presents the design of a near unity electromagnetic energy harvester that uses a Tightly Coupled Antenna array. Compared to the unit cell of metamaterial surfaces, the dimension of a TCA unit cell is about five times larger, thus providing simplified channeling networks and cost-effective solutions. The TCA surface contains an array of Vivaldi shape unit cells with a diode at each cell to convert the harvested electromagnetic energy to dc power. The dc power from each unit cell is channeled to one single load via series inductors. A sample 4 X 4 TCA array, when simulated, fabricated and tested shows solid agreement between the simulated and measured results. The thesis then discusses the idea and design of a dually polarized metasurface for electromagnetic energy harvesting. A 4 X 4 super cell with alternating vias between adjacent cells is designed to allow for capturing the energy from various incident angles at an operating frequency of 2.4 GHz. The collected energy is then channeled to a feeding network that collects the AC power and feeds it to rectification circuitry. The simulation results yield a radiation to AC, and AC to DC conversion efficiencies of around 90% and 80%, respectively. As a proof of concept, an array consisting of nine super cells is fabricated and measured. The experimental results show that the proposed energy harvester is capable of capturing up to 70% of the energy from a plane wave with various incident angles and then converting it to usable DC power. As future work, the last part introduces the concept of metasurface energy harvesting in the infrared regime. The metasurface unit cells consist of an H-shaped resonator with the load placed across the gap of the resonator. Different from infrared meta-material absorber designs, the resonator is capable of not only full absorption but also maximum energy channeling across the load resistance. The numerical simulation demonstrates that 96% of the absorbed energy is dissipated across the load resistance. In addition, a cross-polarized H-resonator design is presented that is capable of harvesting infrared energy using dual polarization within three frequency bands.