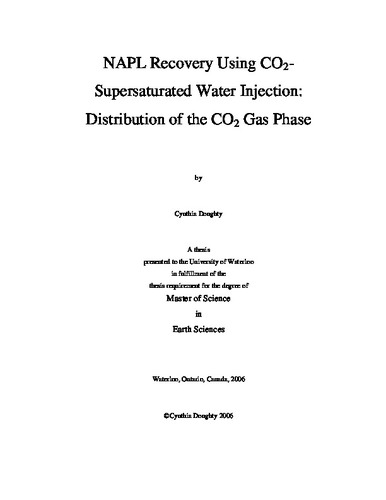 Gas inFusion? is a novel remedial technology that dissolves CO<sub>2</sub> into water under pressure for NAPL recovery. As the supersaturated liquid flows through the porous medium gas evolution occurs in situ as the system returns to thermodynamic equilibrium. The evolution of gas bubbles leads to NAPL recovery by two mechanisms: 1) volatilization and 2) mobilization by the NAPL spreading in a film around the rising bubbles. Laboratory experiments by Li demonstrated that injecting the supersaturated water into a porous medium minimized the buoyancy driven flow of gas and the fingering phenomena that limit typical gas sparging. The distribution of carbon dioxide at partial pressures (p<sub>CO2</sub>) above the applicable hydrostatic pressure and the evolved gas phase were determined in two field experiments conducted in the relatively homogeneous fine to medium sand at CFB Borden. First, CO<sub>2</sub>-supersaturated water was injected into a single point located approximately 4 metres below ground surface. Then this injection was repeated with pumping of two nearby wells to see if the lateral distribution of CO<sub>2</sub> gas could be controlled hydraulically. Groundwater monitoring of p<sub>CO2</sub> above the hydrostatic pressure and geophysical surveys (neutron measurements, surface ground penetrating radar (GPR), and cross-borehole GPR) to find zones of induced gas content were supported by hydraulic monitoring and physical observations of gas bubble distribution at the water table. <br /><br /> Based on the results of these tests, enhanced CO<sub>2</sub> levels above the hydrostatic pressure were observed up to 5. 5-7. 0 m from the injection point and the gas phase up to ~5. 3 m. It was not possible to determine the impact hydraulic control had on the lateral distribution of CO<sub>2</sub> due to problems with the experiment. The distribution of the gas phase was heterogeneous with CO<sub>2</sub> gas pockets forming below low permeability layers, as evidenced by surface GPR, permeameter tests, and grain size analyses. These gas pockets accumulated until sufficient pressure built up to overcome the displacement pressure of these lower permeability layers. At this point there is evidence of CO<sub>2</sub> breakthrough in the cross-borehole GPR data and physical observations of gas bubbles at the water table. These observations are consistent with previous investigations, which indicate that although the Borden aquifer is homogeneous, distinct horizontal layering is present with sufficient variations in permeability/displacement pressure to trap and cause some lateral spreading of a gas phase. The evidence of channeling and the impact of heterogeneities on gas distribution are consistent with air sparging studies.