Treatment of the Cyanotoxins Cylindrospermopsin, Microcystin-LR, and Anatoxin-a by Activated Carbon in Drinking Water 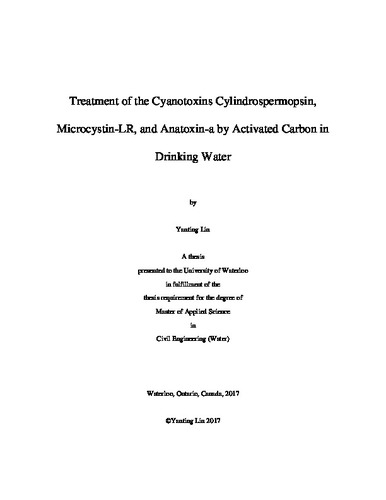 Cyanotoxins are known to cause human and animal illness, in some cases resulting in death, and their presence in drinking water is a potential risk to public health. Cylindrospermopsin (CYL), microcystin-LR (MC-LR), and anatoxin-a (ANTA) are among the most detected and studied cyanotoxins in North American surface water. While microcystin is regulated in drinking water in most North American jurisdictions, lower maximum contaminant limits may be coming as well as the potential addition of CYL and ANTA as regulated contaminants. Powdered and granular activated carbon (PAC and GAC) may be cost-effective barriers for extracellular cyanotoxins in conventional drinking water treatment plants but not all carbons and toxins have been studied. Even less information is available at PAC contact times that are relevant to practice. The primary objective of this research was to investigate the adsorption behavior (rate and capacity) of CYL, MC-LR, and ANTA during treatment with PAC and GAC. Adsorption of CYL, MC-LR, and ANTA was investigated using three commercially available PACs: coal-based COL-PL60-800 (Carbon Activated Corporation), wood-based BG-HHM (Calgon Carbon), and coconut-based WPC® (Calgon Carbon). Initially adsorption was studied in ultrapure water to establish baseline performance and for inter-lab comparisons now and in the future. The BG-HHM (wood) and the WPC (coconut) adsorbed CYL the fastest, the BG-HHM (wood) adsorbed MC-LR the fastest, while the BG-HHM (wood) and WPC (coconut) adsorbed ANTA the fastest. Adsorption capacity was evaluated under both equilibrium and non-equilibrium conditions (0.5 h and 1 h contact times). At equilibrium, the BG-HHM (wood) had the highest CYL capacity, the COL-PL60-800 (coal) had the highest MC-LR capacity, and the WPC (coconut) had the highest capacity for ANTA adsorption. Interestingly, PAC had substantially different capacities under non-equilibrium conditions which serve to more accurately simulate PAC contact times typically available in full-scale water treatment plants. Under non-equilibrium conditions, the wood-based BG-HHM outperformed the other two PACs with the highest capacity for the all three cyanotoxins investigated in this study. The adsorption of CYL, MC-LR, and ANTA was then investigated using Lake Erie water (adjusted to pH 7) collected from the Elgin Area Water Treatment Plant (Southern Ontario, Canada), again using the same PAC products as studied in the ultrapure water investigations. The BG-HHM (wood) adsorbed CYL and MC-LR the fastest, whereas the WPC (coconut) adsorbed ANTA the fastest. At equilibrium, the COL-PL60-800 (coal) had the greatest CYL capacity, the BG-HHM (wood) had the highest MC-LR capacity, and the WPC (coconut) and BG-HHM (wood) retained the greatest and similar capacity for ANTA. Under non-equilibrium conditions, the BG-HHM (wood) had the highest capacity for CYL and MC-LR, while the WPC (coconut) performed best for ANTA removal. Compared to the ultrapure water results, a substantial reduction in adsorptive capacity and a slight decrease in the rate of adsorption were observed in Lake Erie water. To describe the competitive adsorption of cyanotoxins and dissolved natural organic matter (NOM) in Lake Erie water, a competitive adsorption model, the simplified equivalent background compound model (SEBCM), was successfully utilized in this study to predict PAC dose to achieve target removals of each of CYL, MC-LR and ANTA under non-equilibrium conditions (0.5 h contact time). Based on the SEBCM results, an economic analysis was conducted and it was found that the BG-HHM (wood) was the most cost-effective alternative for CYL and MC-LR removal, while none of the selected PACs in this study was an effective barrier for ANTA. CYL adsorption was then investigated in ultrapure water using three virgin GACs, including coal-based F-300® (Calgon Carbon), wood-based C Gran (Norit), and coconut-based Aqua Carb (Siemens), and a preloaded coal-based F-300, previously prepared by Vlad (2015). Among all virgin GACs, the C Gran (wood) adsorbed CYL the fastest, while the F-300 (coal) was slowest. The F-300 (coal) retained the highest equilibrium capacity, while the C Gran (wood) had the lowest. Comparing the performance of virgin and preloaded F-300 (coal), both the rate of adsorption and capacity deteriorated as a result of preloading. Overall, PAC adsorption for CYL and MC-LR is a promising treatment option. Further investigations are required to explain differences observed for ANTA removal by PAC in this study vs. that reported by Vlad (2015). In the case of CYL adsorption by GAC, bench-scale testing has demonstrated that larger scale investigations are justified (at pilot- or full-scale in the event of a bloom). At present, the price and availability of the cyanotoxins is such that larger scale experiments may be cost prohibitive. Additional bench-scale PAC and GAC studies in other water sources are warranted.