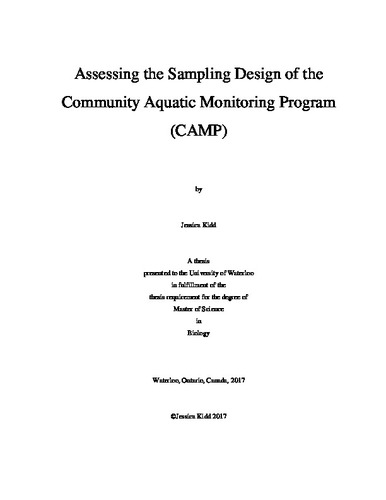 The Community Aquatic Monitoring Program (CAMP) is a community based monitoring program that involves local stakeholders to monitor estuaries and bays in the southern Gulf of St. Lawrence (sGSL). Implemented in 2003, CAMP continues to be administered by Fisheries and Oceans Canada (DFO) in collaboration with the Southern Gulf of St. Lawrence Coalition on Sustainability (Coalition-SGSL). Data are collected annually from up to 36 sites, and include counts of nearshore fish, shrimp, and crabs (i.e., nekton) along with measures of aquatic vegetation, water quality and sediment. The CAMP dataset has potential to inform decision-makers on the relationship between the health of an estuary and its nekton assemblage. However, concerns have been raised regarding the CAMP station selection method, as the majority of station locations was selected to provide easy road access for volunteers. Also, a standard number of six stations was established, regardless of estuary size, to allow for community groups to complete each sampling event within one day. The objective of this study was to assess the ability of CAMP to provide a measure of littoral nekton that represents the overall littoral nekton community of the estuary. The adequacy of the CAMP sampling design was tested by comparing it to a sampling program that applied a stratified random design. A subset of ten estuaries that are monitored by CAMP were selected. Twelve stations were sampled within each estuary with six stations located where CAMP samples, and another six stations randomly located and stratified among the upper, middle, and lower estuary. Differences between the nekton community data were assessed using a cluster analysis, non-metric Multidimensional Scaling (nMDS) ordination, permutational MANOVA (PERMANOVA) and a test of homogeneity of dispersions (PERMDISP). The adequacy of six sample stations was tested by comparing the number of species detected by both sampling designs, and then combining the datasets to predict how many stations would be required to detect all species. The combined dataset was analysed using a one-way PERMANOVA to determine if having nekton assemblage data from more stations would alter the conclusions regarding the differences between sites. The potential need to increase the number of stations was determined by assessing the precision of CAMP in estimating the abundance of influential species, as defined by the similarity percentages (SIMPER) routine. In general, significant differences in nekton assemblages were not detected between sampling designs. Six stations are sufficient to detect the moderately and highly abundant nekton species that contribute to the dissimilarities of estuaries. Increasing the number of CAMP stations would not alter the conclusion about the dissimilarity of sites based on the nekton community assemblages, or greatly increase the precision in estimating counts of influential species. The results indicate the application of CAMP is not limited by station selection bias and would not benefit from increasing the number of stations. Furthermore, programs designed to accommodate volunteers can produce comparable data to scientific studies if designed appropriately. Future analysis of the entire CAMP dataset can be used to determine if there is a relationship between the degree and type of anthropogenic activities influencing an estuary and the littoral nekton assemblages within it.