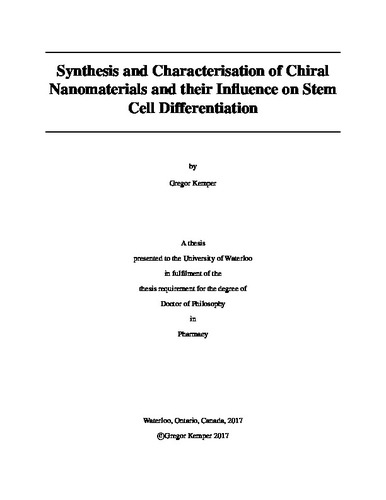 Tissue engineering is a field related to regenerative medicine which aims at replacing or regenerating a patient’s tissue, usually using a combination of cells and a bioactive material which is designed to influence cell behaviour in a desired way. In approaches for bone regeneration, human mesenchymal stem cells (hMSCs) are a common choice of cells because of their ability to proliferate and differentiate into osteoblasts. Harnessing this potential requires biomaterials which promote osteoblastic differentiation, for example by mimicking the conditions in natural bone. Collagen I is a common protein in human bone; it forms fibrils with a characteristic periodic structure, which raises the question whether this particular morphology has in impact on stem cell fate. Artificial collagen-mimicking nanomaterials can help to investigate this question: Gemini surfactants with chiral counterions form twisted bilayers the morphology of which can be tuned by variation of experimental parameters like enantiomeric excess, time and temperature. The selfassembled helical nanoribbons which are obtained by this process can be transformed by a solgel condensation to form silica nanohelices the size and twist pitch of which resembles that of collagen fibres. The objective of this study is to prepare 2D culture environments featuring these nanomaterals (with and without bioactive peptide functionalisation) in order to explore the effect of these materials on hMSC differentiation. Silica helices are fabricated by synthesis of surfactants with tartrate as counterion, and organicinorganic transcription using a silica precursor compound. They can be modified by reaction with APTES and an N-hydroxysuccinimide ester and subsequent covalent immobilisation of a peptide. Two peptides were used in this study, one adhesion-promoting peptide featuring the RGD sequence and the active domain of the osteogenesis-inducing peptide BMP2. Helices with or without this bioactive functionalisation were covalently grafted to glass substrates using APTES and EDC/NHS-coupling. The presence of peptides on helices was shown by the absorption of helix-grafted peptides bearing the FITC-fluorophore. The successful peptide grafting onto glass surfaces was verified by XPS and fluorescence microscopy. The morphology of helices was monitored with TEM before helix immmobilisation on surfaces, and with SEM afterwards. SEM images were used to determine the amount of helices grafted to surfaces. HMSCs were cultivated for four weeks on surfaces modified with APTES, peptide(s) or nanohelices, the latter being either left- or righthanded and functionalised or not with bioactive peptide(s). After fixation, the quantities of the osteogenic markers Runx2 and Osteocalcin (OCN) in the cells were evaluated. The results show that BMP2-functionalised surfaces did indeed exhibit an elevated level of Runx2 and OCN expression. A cooperative osteogenic effect of RGD and BMP2 grafted together could be observed in terms of OCN, but not with Runx2. Some helix-grafted materials exhibited a significantly higher Runx2 and/or OCN expression than the corresponding homogeneous materials, but these differences were not consistent across samples of the same chiral orientation or bioactive functionalisation. Therefore, conclusive general statements about differences in osteogenic effect between helix functionalisations and handednesses are difficult to make. A potential reason for this is the variability of surface coverage of helix-grafted materials: As the quantity of helices that are immobilised onto the surfaces is lower than expected and varies greatly between the samples, the number of cells that are not in contact with the helices might change as well, which can lead to false negatives. The results of a proteomic experiment have shown which proteins are differentially expressed in cells cultured on helices with or without BMP-functionalisation, compared to bare glass. Comparison with other proteomic studies shows that proteins which are known to be upregulated during osteogenic differentiation are overexpressed most frequently in cells cultured on BMPmodified helices. The proteins that were identified with this method might serve as starting point for future investigations.