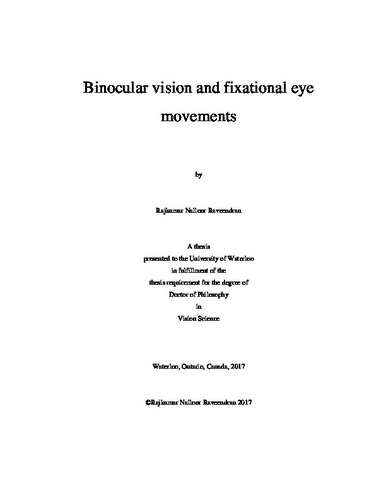 Introduction In observers with amblyopia, abnormal patterns of amblyopic eye (AME) fixational eye movements (FEM) have been associated with monocular (reduced amblyopic eye visual acuity) and binocular sensory deficits (e.g. suppression) of amblyopia. However, it is unknown whether sensory deficits associated with amblyopia cause the FEM abnormalities. The overall goal of this thesis was to investigate the effect of monocular and binocular sensory function on FEM characteristics in observers with normal vision and observers with amblyopia. The specific objectives of this thesis were four-fold. The first objective was to investigate the effect of reduced visual acuity on FEM in observers with normal vision and in amblyopia. The remaining three objectives were experiment specific and were to understand the effect of binocular interaction on FEM in observers with normal vision and amblyopia. In all experiments, participants were instructed to fixate a target that was presented either dichoptically using haploscope or non-dichoptically. Then, the measured FEMs were analyzed in 3 different ways: 1) fixational stability (global bivariate contour ellipse area – BCEA), 2) characteristics of microsaccades and 3) fast Fourier transformation (FFT). Experiment-I Monocular visual acuity (VA) of controls was varied from 20/20 to 20/100 using plus lenses. The amblyopia group completed three monocular conditions; a) AME fixating, b) fellow eye (FFE) fixating and c) FFE fixating with VA matched to the AME using plus lenses. The results showed that the AME had significantly less stable fixation than the FFE even when visual acuity was matched between the two eyes. Similar results were noted for microsaccadic amplitude as well. Reduced VA also had no effect on fixational stability and microsaccadic amplitude in controls. Therefore, impaired AME fixational stability could not be explained on the basis of reduced VA. Experiment-II The objective of Experiment – II was to study whether is there any advantage of binocular fixation over monocular fixation and if there is any advantage, whether is it noted at all contrast levels. Fixation target contrast was varied from 0% to 100% while control participants fixated monocularly (fellow eye occluded) and binocularly. The results showed that the fixational stability was significantly improved during binocular fixation compared to monocular fixation for all contrast levels. FEMs were less stable when the stimulus contrast was 0%, (no central fixation target) during monocular as well as binocular fixation. Though FS was found to be significantly improved during binocular fixation, microsaccades were found to be not different between monocular and binocular viewing conditions. Experiment-III The objective of this experiment was to investigate the effect of binocular interaction on observers with normal vision by introducing a different form of binocular interactions such as binocular rivalry and monocular stimulation. FEMs were measured under three dichoptic viewing conditions; 1) binocular rivalry (orthogonal sinusoidal gratings), 2) monocular stimulation (left eye was presented with a grating and the right eye with a blank mean luminance screen), 3) dichoptic fusion (similarly oriented pair of gratings) and one non-dichoptic viewing condition (single grating presented to both eyes). The results showed that except during monocular stimulation viewing condition, there was no significant difference in fixational stability between the right eye and the left eye. Experiment-IV The objective of this experiment is to investigate the effect of binocular interaction on observers with normal vision and amblyopia by varying the interocular contrast level. FEMs were measured for both eyes simultaneously while interocular contrast was varied by reducing stimulus contrast to one eye whilst keeping it constant at 100% for the other eye. In controls, fixation stability was unaffected by interocular contrast except for when one eye viewed 0% contrast (no central fixation stimulus). In this case, the eye viewing 0% contrast had less stable fixation than the eye viewing 100% contrast. In observers with anisometropic amblyopia, interocular contrast had no effect for any condition. However, the amblyopia group had less stable fixation than the control group for all conditions. The results suggested that, in amblyopia, AME FEM were consensually controlled by the FFE under dichoptic conditions. However, in controls, the two eyes could behave independently. Conclusion Thus, the results of the thesis suggested that monocular sensory deficit (impaired VA) did not influence FEM. However, the relationship between AME VA and AME fixational stability during monocular fixation implied 2 possibilities, 1) abnormal FEM could contribute to impaired VA, and 2) an independent third factor such as positional uncertainty, cortical deficits could mediate both impaired VA and impaired FEM. Similarly, the results of this thesis also suggested binocular sensory deficit (suppression) did not influence FEM. During binocular fixation, AME fixation was consensually controlled by FFE. However, lack of fixation target influenced FEM which suggested positional uncertainty could have resulted in impaired FEM in AME.