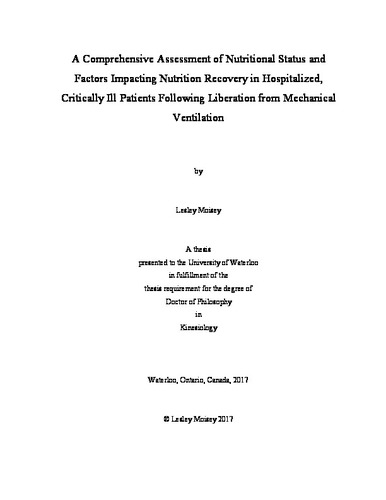 Disease related malnutrition is a concern for the critically ill, however there is a paucity of research examining nutrition recovery in survivors of critical illness. Prior to the development of nutrition interventions to enhance recovery from critical illness, a more comprehensive understanding of the nutrition recovery trajectory and factors influencing the early stages of ward-based recovery is required. Thus, the overarching purpose of this thesis was to produce a comprehensive body of work that enhances our understanding of various facets of nutrition recovery in the hospitalized, critically ill patient following liberation from mechanical ventilation (LMV). To explore and characterize nutrition recovery, I first evaluated: 1) the feasibility of performing common measures of nutritional status during the first seven days following LMV, 2) nutrition intake following LMV, and 3) meal and food intake patterns of patients prescribed non-modified oral diets following LMV. The compilation of these findings illustrated some of the factors that contribute to compromised nutrition recovery in patients following LMV. To better understand nutrition following LMV, feasibility of performing common measures to assess nutritional status was evaluated. Recruitment and retention into the study were also assessed to evaluate the capacity to investigate nutrition recovery. As part of this study, critically ill adults (>18 years) who received mechanical ventilation (MV) for at least 72 hours were recruited. Over a 6-month recruiting period, 538 patients were screened, and of the patients identified as meeting the study eligibility criteria (n=65), 35% consented to participate (n=23). Of the patients who participated (n=19, 42% male, aged 35-85 years), 32% were lost to follow-up prior to the seventh day following LMV. Common methods to assess body composition (weight, mid-upper arm circumference, and bioelectrical impedance analysis to calculate phase angle) and physical function (hand-grip dynamometry) were obtained on greater than 70% of occasions they were to be measured, however, use of standardized and previously validated protocols to obtain these measures was not practical in this patient population. Protocol deviations occurred for 94%, 45%, and 44% of occasions that mid-arm circumference, bioelectrical impedance, and hand-grip strength were measured, respectively. Primarily, the disposition of recovering critically ill patients (decreased level of alertness, muscular weakness, discomfort and pain) precluded proper acquisition of these measurements. Nutrition intake was measured using weighed food records during the first 7 days following LMV. Of the 227 meals served over 125 study days, energy and nutrient intake was successfully measured for 92% of meals. For all days patients were receiving enteral nutrition (EN), the volume of EN formula delivered could be extracted from the chart. Large variations in daily protein (range: 0-151 g/d) and energy (range: 0-2306 kcal/d) intake were observed across all study days. For patients receiving nutrition exclusively via EN (n=48 days), protein and calorie intake was >75% of prescribed on 77% and 88% of occasions, respectively. In contrast, for days that patients received an oral diet as their sole source of nutrition (n=54 days), protein intake was never >75% of prescribed and energy intake was >75% of prescribed on only 24% of occasions. Meal and food intake patterns were examined in a subgroup of 9 patients who had been prescribed a regular (non-texture or fluid modified) diet for at least one day over the study duration. Only 55% and 56% of the total amount of protein and calories provided, respectively were consumed. Although there were no significant differences between the amounts of calories and protein consumed between main meals (195, 255, and 231 kcal and 9, 11, and 9 g protein for breakfast, lunch, and dinner, respectively) considerable individual variation in eating patterns between the patients was observed with respect to the amount of protein and calories consumed at meals and which meals (breakfast, lunch or dinner) the most was consumed. To further characterize dietary prescription practices and use of EN following LMV, a retrospective chart review (n=134, 55% male, mean age 61 years) was conducted. We observed 16% of patients who received EN while ventilated had it discontinued concomitantly with LMV. However, considerable variation in the use of EN therapy and type of oral diet prescriptions in patients prior to hospital discharge was observed. Only 55% of patients who survived the hospital admission ever received a regular, non-modified diet without supplementary EN at the time of hospital discharge, and one in five patients were still receiving EN at the time of hospital discharge. Collectively, these results advance our insight into nutrition recovery following critical illness from a Canadian perspective. Feasible and validated tools to properly assess nutritional status in this unique group of patients are required, as is the need for the development of interventions to enhance protein and energy intake in recovery. Due to the heterogeneity of the patients observed, nutrition interventions delivered by practicing clinicians should be as individualized as much as possible to achieve optimal outcomes.