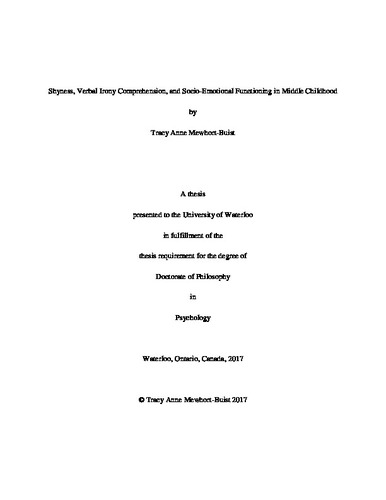 Shy children simultaneously desire to engage in social interactions with their peers and to avoid social situations (particularly novel ones) due to feelings of anxiety and self-consciousness. Although not in itself considered pathological, childhood shyness is a significant risk factor for a number of negative social and emotional outcomes including peer victimization, low perceived friendship quality, loneliness, and symptoms of depression. Previous work finds that pragmatic language skills and aspects of communicative competence influence the relationship between shyness and these negative outcomes. Counterfactual verbal irony, in which the literal meaning of an utterance is directly opposite its intended meaning, is a figurative language form that has been posited to have a number of important social functions. The Tinge Hypothesis, for example, claims that the use of verbal irony mutes the critical tone of ironic criticisms, and simultaneously renders ironic compliments less kind than literal compliments. It has also been shown that shyness is related to children’s ratings of the attitude of ironic speakers, with children who are shyer rating ironic criticisms as being meaner than did less shy children. Building on these findings, and the potential protective role of good communication skills, this dissertation examined relations between verbal irony comprehension, effective communication, and socio-emotional outcomes in shy children aged 8-12 years. Using a series of vignettes and self-report measures, Study 1 revealed that while neither verbal irony comprehension nor socio-communicative skills mediated the relationship between shyness and its associated negative outcomes, verbal irony comprehension moderated the relationship between shyness and symptoms of loneliness and depression. Contrary to predictions, shy children with better verbal irony comprehension had greater loneliness and depression symptoms. Similarly, for girls, better verbal irony comprehension strengthened the relationship between shyness and peer victimization. In contrast, for boys, better verbal irony comprehension and better socio-communicative skills were associated with a reduction in the risk of victimization associated with shyness. Possible explanations for these unexpected findings are discussed. Within the broad aim of examining the interplay between trait shyness and ironic language use, I was also interested in whether shyness influenced children’s perceptions of the communicative intentions and personal characteristics of ironic speakers beyond judging speaker attitudes. In Study 2 children were asked to rate fictional characters on a number of dimensions after reading short vignettes in which the characters interacted with a same-gendered peer using sarcastic or literal criticism or praise. Children generally rated speakers who used verbal irony as being funnier, yet less kind than speakers who made literal remarks. Non-shy participants also indicated that they would be less likely to befriend a speaker who used irony with a shy target, suggesting that non-shy children may feel it is less appropriate to use verbal irony with shy children. Overall, regardless of whether speakers used ironic or literal statements, shy children felt that the speaker was kinder and more popular when they had seen the speaker interacting with a shy target, suggesting that the participants may have been identifying with the targets. Across the two studies, the majority of the findings were consistent with the Tinge Hypothesis, with children rating speakers who made ironic compliments less favourably than those who made literal compliments. In a second part of Study 2, when children were asked to imagine themselves in the vignettes and then indicate the likelihood that they, themselves, would tell the truth, lie, use sarcasm or make a prosocial remark, the findings again followed the Tinge Hypothesis, with sarcasm being favoured over literal criticisms, but literal compliments being favoured over ironic compliments. Girls’ responses were more consistent with this trend, while boys were more likely to choose the less prosocial options, such as literal criticisms, ironic compliments, and lying in positive contexts. These two studies explore the complex relations between shyness, gender, verbal irony comprehension, and social and emotional functioning (Study 1), and children’s perceptions of speakers using verbal irony (Study 2). Many of the findings suggested that for shy children strong verbal irony comprehension and socio-communicative competence were related to poorer social and emotional outcomes. This suggests that targeting skills deficits may not be the route to mitigating the negative social and emotional outcomes associated with shyness. Shyness was not related to perceptions to ironic speakers across many measures, although there was some preliminary evidence that non-shy children thought it was less appropriate to use irony with shy targets. Further research should continue to explore how the risks associated with childhood shyness could be mitigated.