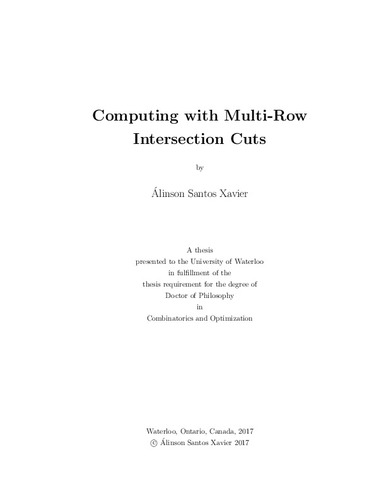 Cutting planes are one of the main techniques currently used to solve large-scale Mixed-Integer Linear Programming (MIP) models. Many important cuts used in practice, such as Gomory Mixed-Integer (GMI) cuts, are obtained by solving the linear relaxation of the MIP, extracting a single row of the simplex tableau, then applying integrality arguments to it. A natural extension, which has received renewed attention, is to consider cuts that can only be generated when considering multiple rows of the simplex tableau simultaneously. Although the theoretical importance of such multi-row cutting planes has been proved in a number of works, their effective use in practice remains a challenge. Since the entire class of multi-row cuts proves challenging to separate, one approach to obtain them is the following. First, the integral non-basic variables are fixed to zero. Then, a lattice-free set, which induces an intersection cut, is generated. Finally, the cut coefficients for the integral non-basic variables are computed by the so-called trivial lifting procedure. In this thesis, we address some computational aspects of this approach, and we make three novel contributions. In our first contribution, we describe a small subset of multi-row intersection cuts based on the infinity norm, which works for relaxations with arbitrary numbers of rows. We present an algorithm to generate them and run extensive computational experiments to evaluate their effectiveness. We conclude that these cuts yield benefits comparable to using the entire class of multi-row cuts, but at a small fraction of the computational cost. In our second contribution, we describe a practical method for performing the trivial lifting step on relaxations with two rows. Unlike previous methods, our method is applicable to intersection cuts derived from any lattice-free set, and, for maximal lattice-free sets, it is guaranteed to run in constant time. Computational experiments confirm that the algorithm is at least two orders of magnitudes faster than current alternatives. In our final contribution, we revisit single-row relaxations containing a single integral non-basic variable, with the goal of obtaining inequalities that are not dominated by GMI cuts. The novelty in our approach is that we use the framework of intersection cuts and trivial lifting, which allows us to obtain a geometric interpretation of our cuts, a fast algorithm for generating them, and an upper bound on their split rank. We run computational experiments and conclude that, for a few instances, they close considerably more gap than GMI cuts alone.