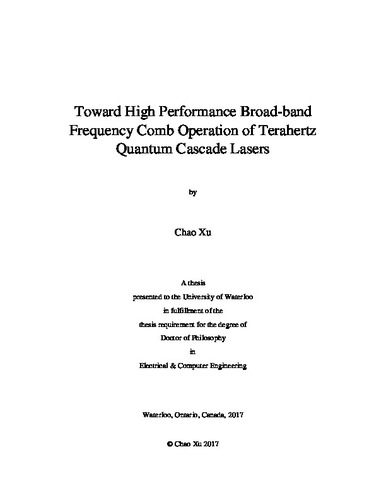 Recent advances in Terahertz Quantum Cascade Laser (THz QCL) development are pushing this technology ever closer to practical application, particularly within the spectroscopic field. For this reason, optimizing the operation of THz QCL frequency combs, which can potentially provide unprecedented accuracy and stability to the optical spectra in a broad frequency band, is of particular interest to the research community. The THz QCLs frequency comb was only recently realized using two separate techniques: either a broad-gain active region or a group velocity dispersion controlled waveguide. However, due to residual optical dispersion from both the gain medium and the cold waveguide, comb formation in these reported THz QCLs can only sustain a limited current injection region and the observed comb frequency range is much narrower than the bandwidth of the designed gain medium. To overcome these limitations, this thesis targets a new THz QCL frequency comb device design that simultaneously exploits the broadband gain active region and a group velocity dispersion (GVD)-compensated waveguide over an octave frequency band of 2-4 THz. In designing a broadband gain active region, two heterogeneous structures are proposed and simulated, with one combining three different bound-to-continuum (BTC) active regions operating at a temperature of 25 K, and another one consisting of four different resonant-phonon (RP) active regions operating at the liquid nitrogen temperature (77 K) or higher. The simulation results show that both active region designs can provide a broadband and ‘flat-top’ gain profile covering the frequency range from 2 to 4 THz. To design a group velocity dispersion-compensated waveguide, strategies are explored for simulating chirped Distributed Bragg Reflectors (DBRs) that can serve as THz QCL metal-metal waveguides, and one-dimensional (1D) and three-dimensional (3D) modeling approaches are established and verified. A novel two-section chirped DBR is proposed, which provides substantially-improved group delay compensation over a broadband octave frequency range from 2 to 4 THz. Two THz QCL structures are grown using in-house molecular beam epitaxy and THz QCL devices equipped with a metal-metal waveguides are fabricated in the University of Waterloo Quantum-Nano-Centre clean-room fabrication lab. The experimental results demonstrate that the new THz QCL active region design can operate up to a maximum lasing temperature of 111 K, and with a broad lasing spectrum covering frequencies from 2.36 to 2.86 THz under pulse mode, at temperature of 13 K. The combined theoretical and experimental work would ultimately lead to the demonstration of improved THz QCL frequency comb operation over the broadband range from 2 to 4 THz.