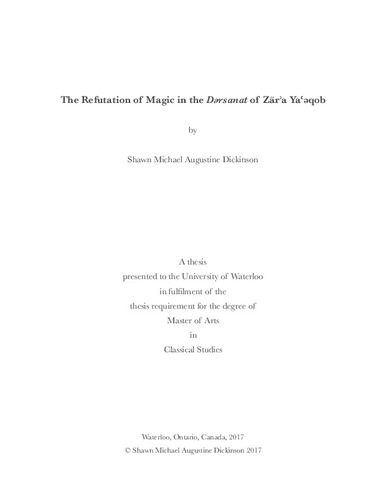 The 15th century Ethiopian Emperor Zärʾa Yaʿəqob (r. 1434-1468) is perhaps the most influential figure in the almost 1700 year history of the Ethiopian Church. One would be hard-pressed to name an individual who can match the amount of reforms, innovations, and persecutions brought about by him, the corpus of writings attributed to him, and the many acts and miracles associated with his life. Indeed, almost every aspect of modern practice in the Ethiopian Orthodox Täwaḥədo Church has in some way been touched by the Emperor’s influence, from the ecclesiastical calendar to canon law to ritual practice. Zärʾa Yaʿəqob is often known for his involvement in the theological controversies that were prominent during his reign, the instigators of which often elicited his ire, but no group of individuals were more feared or hated by the Emperor than magicians. Many of the works attributed to Zärʾa Yaʿəqob, including the Ṭomarä Təsbʾət (Epistle of Humanity), the Mäṣḥafä Bərhan (Book of Light), and the Mäṣḥafä Miläd (Book of the Nativity), contain rebukes of magicians of different sorts, from diviners to sorcerers or charmers to demoniac soothsayers. In order to argue convincingly against these practices, Zärʾa Yaʿəqob based his authority on texts from the Old and New Testaments and pseudo-Apostolic texts, adapting the motifs and arguments to suit his purposes, ultimately depicting practitioners of magic as wicked individuals, condemned by the Apostles, idolatrous, and destined for destruction. This use of sources and of portrayal formed a key part of the Emperor’s efforts to root out magic in his Empire and an analysis of these efforts offers useful insights into medieval Ethiopian spirituality and religion, homiletics, theology, ecclesiastical politics, and even state politics.

Shawn Michael Augustine Dickinson (2017). The Refutation of Magic in the Dərsanat of Zärʾa Yaʿəqob. UWSpace. http://hdl.handle.net/10012/11887