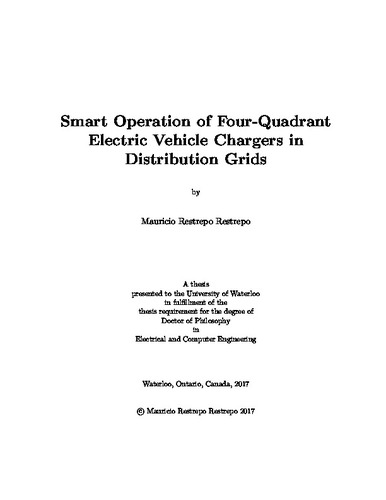 Many policies and programs adopted in the context of climate change mitigation and substitution of fossil fuels are contributing to the continuous development and growth of Electric Vehicles (EVs) in urban mobility systems, reaching 1.26 million units on the roads through the end of 2015. Even though the increasing number of EVs will create problems in distribution systems, which can be mitigated using smart charging strategies, there will also be economic opportunities for EV owners to provide services to the grid while their vehicle are parked and plugged in, a concept known as Vehicle-to-Grid (V2G). Most of the studies on V2G have concentrated on the provision of services such as frequency regulation or spinning reserves, which may reduce the battery life because of the required extra charging/discharging cycles, and little attention has been paid to the possibility of providing reactive power control services to the grid by using the ac/dc converter and the dc link capacitor available in most advanced chargers, a practice that does not compromise the vehicle battery life. These kinds of chargers, which are known as four-quadrant EV chargers due to the capability of being operated in all quadrants of the P-Q plane, can be used in distribution networks to improve the power factor and help regulate voltage, thus facilitating larger EV penetrations, as discussed in this thesis. In the first part of this thesis, a new average model of a single-phase, four-quadrant EV charger is developed. The steady-state and step responses of the proposed model for different P-Q requests, corresponding to the operation in the four quadrants of the P-Q plane, are used to validate its performance against a four-quadrant EV charger prototype. The model is shown to be useful for efficient time-domain simulations and studies that include a number of EV chargers, such as EV integration studies in Low-Voltage (LV) distribution networks. A practical case study is presented to demonstrate and test the performances of the four-quadrant charger and its model, investigating the voltage interactions of several chargers in an LV residential network during the provision of three vehicle-to-grid (V2G) strategies for active and reactive power. In the second part, a novel three-stage algorithm to coordinate the operation of four-quadrant EV chargers with other volt/var control devices in Medium-Voltage (MV) and LV distribution feeders is proposed. The first stage of the algorithm is operated on a day-ahead basis and defines the Load Tap Changer (LTC) and capacitor schedules while minimizing the peak load associated with EVs in the distribution system. The second and third stages update their operation every five minutes, to fairly allocate the aggregated and individual EV loads in the MV and LV feeders, respectively, while minimizing active power losses and voltage deviations. The proposed technique is applied to CIGRE's North-American MV and LV benchmark systems to demonstrate its ability to properly allocate EV loads, and improve distribution system performance in terms of losses and voltage profiles.