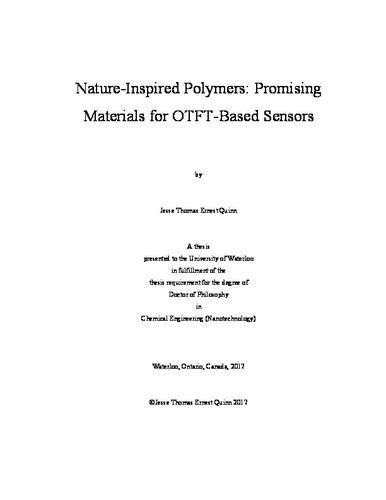 The concept of an organic thin film transistor was first introduced in the late 1980s and research was directed toward two key merits of performance, field-effect mobility and current ON/OFF ratio. Today these two key merits of performance are still highly sought after; however, a shortcoming associated with most organic semiconductors is their susceptibility to chemical interactions and photo-excitation; to name but a few of their caveats. Consequently, the development of organic semiconductors with high charge carrier transport as well as good air stability is still desired. Nature provides a vast diversity of materials and looking for natural or nature inspired semiconductors appears to be a promising route towards interesting and pertinent materials. Organic thin film transistors based on natural or natural-inspired semiconductors such as indigo, -carotene, indanthrene, and perylene diimide have demonstrated good charge carrier transport and some cases demonstrated equally good stability in ambient conditions. In this work, a number of moderately to excellent air stable polymeric semiconductors were designed and synthesized that were nature inspired. Chapter 3 describes the synthetic account and elaborates on a broad spectrum of properties pertaining to the novel fluorene-fused triphenodioxazine based polymer (PFTPDOBT). PFTPDOBT exhibited excellent charge transport performance in ambient conditions reaching hole mobilities as high as ~10^-2 cm^2 V^-1 s^-1 and modest hole mobilities in water-gated transistors (~10^-3 cm^2 V^-1 s^-1). In Chapter 4, a series of pyrazino[2,3-g]quinoxaline-2,7-dione (PQx) based polymers were developed and characterized. These PQx based polymers displayed exciting UV-Vis-NIR spectra when in the presence of an organic acid or Lewis acid. Their electrical characteristics in OTFTs were typical of ambipolar charge transport. Hole mobilities reached as high as ~10^-2 cm^2 V^-1 s^-1 with corresponding electron mobilities as high as ~10^-3 cm^2 V^-1 s^-1. Lastly, Chapter 5 gives accounts on significant research pertaining to novel polymeric semiconductors based on the pyrimido[4,5-g]quinazoline-4,9-dione (PQ) moiety. A systematic study of PQ-based polymeric semiconductors is presented in both nitrogen, ambient, and aqueous environments. Typical hole charge transport was obtained between ~10^-2 and ~10^-3 cm^2 V^-1 s^-1. Both PPQ2T-BT-24 and PPQ2T-TT-24 demonstrated moderate to excellent stability in these environments. To exploit the photo-excitation of organic semiconductors, a series of PQ-based polymeric semiconductors were incorporated in phototransistors and also blended with PC61BM. The PPQ2T-BT-24:PC61BM blend reached ultrafast response times as low as 1 ms for rise and 8 ms for fall with photoresponsivity as high as 0.88% and EQE of 189%. Lastly, PPQ2T-BT-24 and PPQ2T-TT-24 were incorporated into OTFT gas sensors where they demonstrated low detection limits with fast recovery times for a particular analyte.