The Biomechanics of Mammary Epithelial Morphogenesis 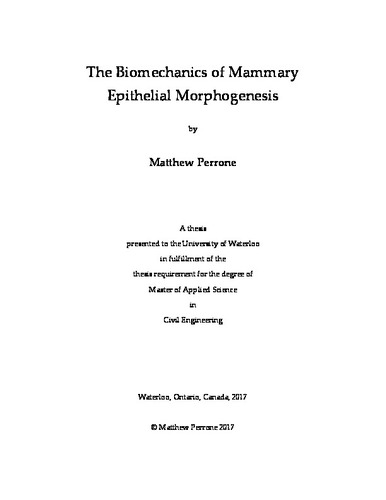 Major organs and tissues such as the lung, kidney, liver, and the salivary and mammary glands are complex structures, but share a fundamental building block – epithelial cells. During tissue formation – a process known as morphogenesis – epithelial cells express motile behaviour. Although numerous identified transcripts, genes, and molecular pathways are responsible for the epithelial spatial organization of these organs; the way in which epithelial cells move and rearrange to form tissues is incompletely understood. Advanced imaging techniques provide snapshots of epithelial morphogenesis, but do not reveal cell motions or the forces that drive them. The goal of this study was to use biomechanics and computational modeling to fill this knowledge gap by identifying and confirming the cellular mechanics of mammary epithelial tube morphogenesis. Identifying these motile behaviours connects the transcripts, genes, and molecular pathways responsible for morphogenesis to the resulting cellular movements. In addition, many invasive carcinomas originate in epithelial tissues of major organs and it is the epithelial cells that become malignant. Knowledge of how carcinomas acquire motile behaviours is of particular interest in the field of medicine as it may lead to a better understanding of metastasis – a deadly disease responsible for approximately 90% of cancer-related deaths. Identifying the motile behaviours of epithelial cells during morphogenesis provides a mechanical basis of understanding how invasive carcinomas may move during the early stages of metastasis. In this study, inference techniques were applied to 3D images of in vitro cells in organoids to determine the interfacial tensions associated with the molecular activities and cellular behaviours proposed to drive epithelial tube morphogenesis. Then, finite element (FE) modeling was used to confirm the sufficiency of the identified interfacial tensions to drive epithelial tube morphogenesis. The model showed that various combinations of interfacial tensions are sufficient to drive cell migration and intercalation and, when combined with a time-varying boundary capture mechanism and high basal stress, are sufficient to drive tube elongation and polarization. Finally, a prediction model was proposed in which cell motility behaviour may be predicted solely by force inference from cell geometry. This study demonstrates that computational modeling can act as a novel window into a biological system by providing insights that cannot be obtained by advanced imaging and other means. This study also illustrates the importance of iterative dialogue between physical experimentation and modelling for developing a quantitative understanding of how cells collectively behave to form complex tissues and organs.