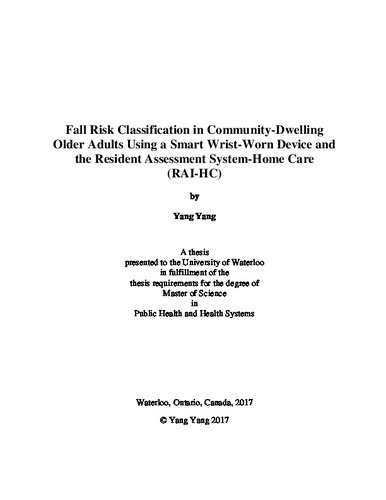 Background: Falls are a serious problem especially in the aging population. To accurately identify individuals at risk for falls and mitigate the devastating effects caused by falls has become prominent to geriatrics and public health agencies. Leveraging wearable technologies and clinical assessment information may improve fall risk classification. Objectives: The overall objectives of this thesis project are to: (1) investigate the similarities and differences in physical activity (PA), heart rate (HR) and night sleep (SP) in a sample of community-dwelling older adults with varying fall histories, using a smart wrist-worn device; and (2) examine the risk factors for falls in the target population, create fall risk classification models and evaluate classification performances based on: i) wearable data, ii) the Resident Assessment Instrument for Home Care (RAI-HC), and iii) the combination of wearable data and the RAI-HC system. Methods: Two parallel studies were conducted in this project. Study I was a community-based cross-sectional study, utilizing the RAI-HC system to examine the risk factors for falls in older people. In the primary analysis, the ordinal attribute of previous falls (0, 1, and ≥ 2) was used as the outcome variable to build the proportional odds models (POM) for ordinal logistic regression. In the secondary analysis, the binary attribute of falls (yes/no) was used to distinguish fallers and non-fallers. Study II, a prospective, observational study was conducted to investigate the similarities and differences among three independent faller groups (non-fallers, single fallers, and recurrent fallers) based on the number of previous falls in a sample of older adults living in community, with continuous measurements of PA, HR and SP using a smart wearable device. Descriptive statistics and simple statistical analyses were conducted to test the differences between groups. The wearable and RAI-HC assessment data were further analyzed and utilized to create fall risk classification models, with two supervised machine learning algorithms: logistic regression (LR) and decision tree (DT). The calculation of a set of performance metrics was performed to evaluate the classification performance of each final model. Results: Study I: Of 167,077 individuals aged ≥ 65 in the RAI-HC data set, 113,529 (68.0%) had no history of falls, 27,320 (16.4%) had one fall, and 26,226 (15.7%) experienced multiple (≥ 2) falls. Unsteady gait, Activities of Daily Living (ADL) decline, ADL self-performance on transfer dependency, short-term memory problem, primary modes of locomotion (indoors), stair climbing, bladder continence, and limit going outdoors due to fear of falling were significant predictors of fall risk in both human and computer feature selection models derived from the Minimum Data Set-Home Care (MDS-HC). The Method of Assigning Priority Levels (MAPLe) (1 vs. 5: odds ratio (OR) = 0.20; 95% confidence internal (CI), 0.18-0.22), Changes in Health, End-Stage Disease, Signs, and Symptoms (CHESS) (0 vs. 5: OR = 0.27; 95% CI, 0.21-0.36), ADL Clinical Assessment Protocol (CAP) (0 vs. 2: OR = 0.21; 95% CI, 0.20-0.22), Cognitive CAP (0 vs. 2: OR = 0.33; 95% CI, 0.31-0.35), and Urinary Incontinence CAP (3 vs. 0: OR = 1.77; 95% CI, 1.62-1.94) were strong predictors in classifying older people with past fall histories based on the CAPs and a variety of summary scales and algorithms available within the RAI-HC assessment. The POM built on all available items on the RAI-HC data set achieved the best performance in classifying the three faller groups, with overall classification accuracy of 71.5%, and accuracies of 93.3%, 5.5% and 46.0% in classifying the non-faller, single faller and recurrent faller group, respectively. Likewise, the logistic regression model built on all available RAI-HC items achieved the best performance in distinguishing fallers and non-fallers, with the highest overall classification accuracy of 75.1%, the largest area under the curve (AUC) of 0.769, and the lowest Brier score of 0.171. Study II: Of 40 participants aged 65-93, 16 (40%) had no previous falls, while 8 (20%) and 16 (40%) had experienced one and multiple (≥ 2) falls, respectively. The wearable components of PA measurements extracted from the smart wrist-worn device were significantly different among three faller groups. Daily walking HR and daily activity time were identified as the best subset of predictors of fall risk with wearable data. Classification models derived from the RAI-HC data set containing 40 participants’ latest assessments outperformed those based on wearable data only. The best classification model was a decision tree based on the combination of both data sets with 80.0% of overall classification accuracy, and accuracies of 87.5%, 50.0% and 87.5% in classifying the non-faller, single faller and recurrent faller group, respectively. Conclusions: Continuous measurements of PA, HR and SP appear to supplement the RAI-HC system in facilitating fall risk stratification. Future fall risk assessment studies should consider leveraging wearable technologies to supplement resident assessment instruments.