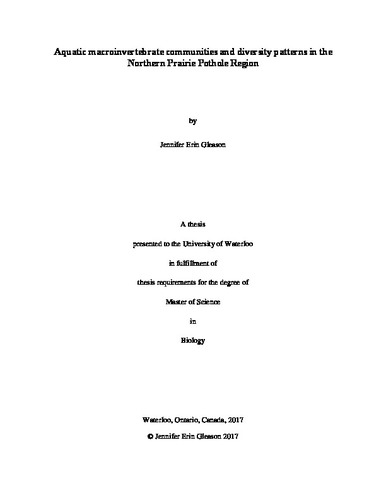 The Northern Prairie Pothole Region (NPPR) of Alberta, Canada contains numerous shallow marshes that serve as important habitat for wildlife and provide many essential ecosystem services. Many of these pothole wetlands have been destroyed or degraded by agricultural activity, prompting research into their condition and management. Aquatic macroinvertebrates are frequently used as indicators of environmental condition in rivers and lakes, but their effectiveness as indicators in prairie pothole marshes is not clear. I discovered that, contrary to my predictions, macroinvertebrate richness and community composition at family-level resolution do not respond to land use. Instead, macroinvertebrate community composition in pothole marshes is structured primarily by hydroperiod, which ranges from temporary, through seasonal and semi-permanent, to permanent marsh classes. I discovered that the macroinvertebrate abundance, diversity and community composition differed significantly among wetland permanence classes, and that macroinvertebrates exhibited a nested community composition along this hydrological gradient. In other words, macroinvertebrates in temporary wetlands were not unique, but rather subsets of the taxa occupying more permanent wetlands. I also looked at macroinvertebrate functional groups (desiccation strategies, functional feeding groups and behavioural guilds). I discovered that the subset of taxa occupying temporary marshes were those that possess strategies for surviving the drawdown period, such as drought resistant stages or the ability to disperse to larger water bodies. Most functional feeding groups and behavioural guilds were more abundant in permanent wetlands; however, variation existed that was unrelated to hydroperiod and might be due to differences in aquatic vegetation. Like abundance, both alpha and gamma diversity were highest in permanent marshes; however, beta diversity was highest in temporary mashes. This suggests that alpha and gamma diversities are constrained in pothole marshes by the tolerance of taxa to periodic desiccation, in keeping with the species-sorting model of community assembly. However, in temporary marshes the assembly process is reinitiated frequently, and is therefore more strongly influenced by the stochastic aspects of dispersal. This yields a higher beta diversity or taxon turnover among temporary marshes and is in line with neutral theory. This stresses the importance of both local and regional factors in shaping biodiversity and provides insight into the community ecology of wetland macroinvertebrates and their associations with environmental variables.