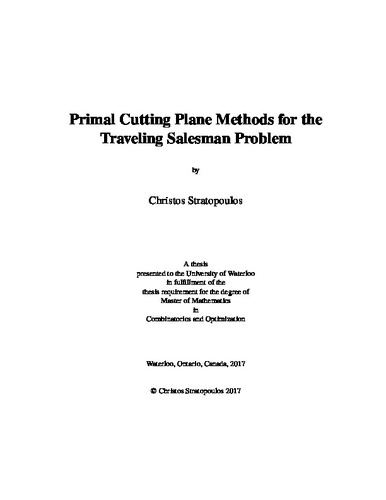 Most serious attempts at solving the traveling salesman problem (TSP) are based on the dual fractional cutting plane approach, which moves from one lower bound to the next. This thesis describes methods for implementing a TSP solver based on a primal cutting plane approach, which moves from tour to tour with non-degenerate primal simplex pivots and so-called primal cutting planes. Primal cutting plane solution of the TSP has received scant attention in the literature; this thesis seeks to redress this gap, and its findings are threefold. Firstly, we develop some theory around the computation of non-degenerate primal simplex pivots, relevant to general primal cutting plane computation. This theory guides highly efficient implementation choices, a sticking point in prior studies. Secondly, we engage in a practical study of several existing primal separation algorithms for finding TSP cuts. These algorithms are all conceptually simpler, easier to implement, or asymptotically faster than their standard counterparts. Finally, this thesis may constitute the first computational study of the work of Fleischer, Letchford, and Lodi on polynomial-time separation of simple domino parity inequalities. We discuss exact and heuristic enhancements, including a shrinking-style heuristic which makes the algorithm more suitable for application on large-scale instances. The theoretical developments of this thesis are integrated into a branch-cut-price TSP solver which is used to obtain computational results on a variety of test instances.