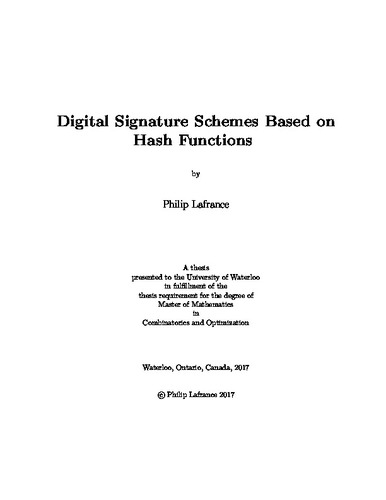 Cryptographers and security experts around the world have been awakened to the reality that one day (potentially soon) large-scale quantum computers may be available. Most of the public-key cryptosystems employed today on the Internet, in both software and in hardware, are based on number-theoretic problems which are thought to be intractable on a classical (non-quantum) computer and hence are considered secure. The most popular such examples are the RSA encryption and signature schemes, and the Elliptic Curve Diffie-Hellman (ECDH) key-exchange protocol employed widely in the SSL/TLS protocols. However, these schemes offer essentially zero security against an adversary in possession of a large-scale quantum computer. Thus, there is an urgent need to develop, analyze and implement cryptosystems and algorithms that are secure against such adversaries. It is widely believed that cryptographic hash functions are naturally resilient to attacks by a quantum adversary, and thus, signature schemes have been developed whose security relies on this belief. The goal of this thesis is to give an overview of hash-based cryptography. We describe the most important hash-based signature schemes as well as the schemes and protocols used as subroutines within them. We give a juxtaposition between stateful and stateless signature schemes, discussing the pros and cons of both while including detailed examples. Furthermore, we detail serious flaws in the security proof for the WOTS-PRF signature scheme. This scheme had the feature that its security proof was based on minimal security assumptions, namely the pseudorandomness of the underlying function family. We explore how this flawed security argument affects the other signature schemes that utilize WOTS-PRF.