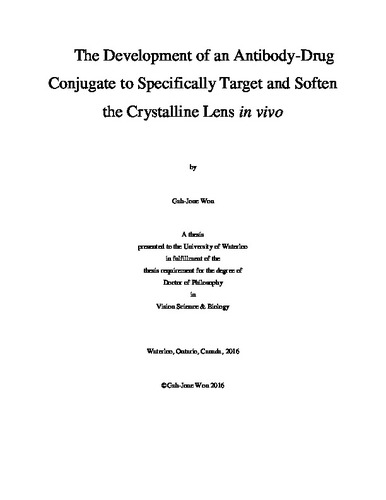 Helmholtz’s classical theory of accommodation states that, within the eye, contraction of the annular ciliary muscle releases the passive tension of zonules that hold the lens in a flattened state. As a result, the surface curvature of the lens steepens, and so too does dioptric power of the eye, allowing for nearby vision. It was also hypothesized that presbyopia, the age-related loss of accommodation, is due to the loss of ability for the lens to deform with age. Recently, the crystalline lens has been shown to possess a network of actomyosin filaments that are organized to help give the lens structural integrity. Given that cytoskeletal proteins are known to contribute to the integrity and biomechanical properties of cells, the question is raised of whether lenticular cells and the lens as a whole are affected by changes to these proteins and their distributions, and if so, whether a drug therapy can be designed to specifically target and soften the crystalline lens by inhibiting cytoskeletal protein interactions. This study was carried out in three stages: (1) Investigating the effects of various physiological inhibitors on the overall stiffness of the crystalline lens. (2) The development of a targeted drug therapy using one of the aforementioned inhibitors. (3) Testing the newly synthesized targeted drug therapy on an in vivo system, and assessing its effect on the accommodative system.

Gah-Jone Won (2017). The Development of an Antibody-Drug Conjugate to Specifically Target and Soften the Crystalline Lens in vivo. UWSpace. http://hdl.handle.net/10012/11628