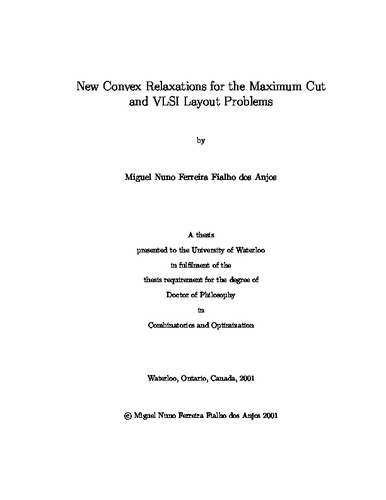 It is well known that many of the optimization problems which arise in applications are <I>hard</I>, which usually means that they are NP-hard. Hence much research has been devoted to finding <I>good</I> relaxations for these hard problems. Usually a <I>good</I> relaxation is one which can be solved (either exactly or within a prescribed numerical tolerance) in polynomial-time. Nesterov and Nemirovskii showed that by this criterion, many convex optimization problems are good relaxations. This thesis presents new convex relaxations for two such hard problems, namely the Maximum-Cut (Max-Cut) problem and the VLSI (Very Large Scale Integration of electronic circuits) layout problem. We derive and study the properties of two new strengthened semidefinite programming relaxations for the Max-Cut problem. Our theoretical results hold for every instance of Max-Cut; in particular, we make no assumptions about the edge weights. The first relaxation provides a strengthening of the well-known Goemans-Williamson relaxation, and the second relaxation is a further tightening of the first. We prove that the tighter relaxation automatically enforces the well-known triangle inequalities, and in fact is stronger than the simple addition of these inequalities to the Goemans-Williamson relaxation. We further prove that the tighter relaxation fully characterizes some low dimensional faces of the cut polytope via the rank of its feasible matrices. We also address some practical issues arising in the solution of these relaxations and present numerical results showing the remarkably good bounds computed by the tighter relaxation. For the VLSI layout problem, we derive a new relaxation by extending the <I>target distance</I> concept recently introduced by Etawil and Vannelli. The resulting AR (Attractor-Repeller) model improves on the NLT (Non-linear optimization Layout Technique) method of van Camp et al. by efficiently finding a good initial point for the NLT solver. Because the AR model is not a convex optimization problem, we isolate the source of the non-convexity and thereby derive a convex version of the model. This derivation leads to the definition of certain generalized target distances with an interesting practical interpretation. Finally, we present numerical results that demonstrate the potential of the AR model.