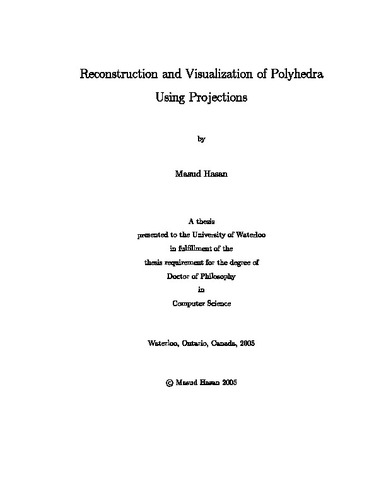 Two types of problems are studied in this thesis: reconstruction and visualization of polygons and polyhedra. <br /><br /> Three problems are considered in reconstruction of polygons and polyhedra, given a set of projection characteristics. The first problem is to reconstruct a closed convex polygon (polyhedron) given the number of visible edges (faces) from each of a set of directions <em>S</em>. The main results for this problem include the necessary and sufficient conditions for the existence of a polygon that realizes the projections. This characterization gives an algorithm to construct a feasible polygon when it exists. The other main result is an algorithm to find the maximum and minimum size of a feasible polygon for the given set <em>S</em>. Some special cases for non-convex polygons and for perspective projections are also studied. <br /><br /> For reconstruction of polyhedra, it is shown that when the projection directions are co-planar, a feasible polyhedron (i. e. a polyhedron satisfying the projection properties) can be constructed from a feasible polygon and vice versa. When the directions are covered by two planes, if the number of visible faces from each of the directions is at least four, then an algorithm is presented to decide the existence of a feasible polyhedron and to construct one, when it exists. When the directions see arbitrary number of faces, the same algorithm works, except for a particular sub-case. <br /><br /> A polyhedron is, in general, called equiprojective, if from any direction the size of the projection or the projection boundary is fixed, where the "size" means the number of vertices, edge, or faces. A special problem on reconstruction of polyhedra is to find all equiprojective polyhedra. For the case when the size is the number of vertices in the projection boundary, main results include the characterization of all equiprojective polyhedra and an algorithm to recognize them, and finding the minimum equiprojective polyhedra. Other measures of equiprojectivity are also studied. <br /><br /> Finally, the problem of efficient visualization of polyhedra under given constraints is considered. A user might wish to find a projection that highlights certain properties of a polyhedron. In particular, the problem considered is given a set of vertices, edges, and/or faces of a convex polyhedron, how to determine all projections of the polyhedron such that the elements of the given set are on the projection boundary. The results include efficient algorithms for both perspective and orthogonal projections, and improved adaptive algorithm when only edges are given and they form disjoint paths. A related problem of finding all projections where the given edges, faces, and/or vertices are not on the projection boundary is also studied.