Aural, Ocular, and Sequential Rhetoric in Two Contemporary American Stories, in Prose and Film: Patterns of Anxiety in Fight Club and The Road 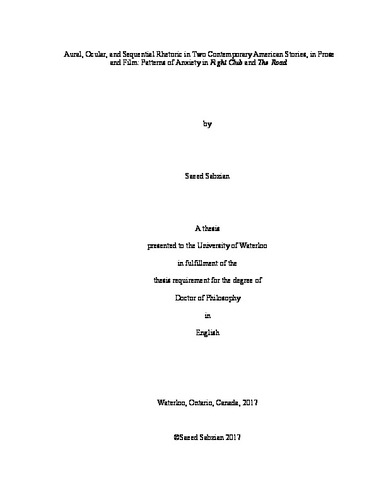 The dissertation rhetorically examines anxiety and fear in Fight Club and The Road, in their both cinematic and prose versions, texts that reflect a mood of contemporary American society that has been characterized by humanities scholars with terms such as a “culture of fear” and a “culture of anxiety.” In dialogue with these scholars, I argue that literary and rhetorical criticism need additional strategies to make this culture, and the affect of texts more generally, more generative of critical knowledge. In this context, I advance two critical readings, in a triangulating methodology that leverages sound, image, and sequence. Fight Club I read as a modern-day psychomachia—a war of, for, and by the soul, in which a schism of the psyche glosses itself as divine or authentic and motivates a suffering subject to struggle for transformation or recovering to identity. The Road I read as a quest narrative to regenerate a blasted world. Quests, too, are centered on conflict and struggle, not for supremacy over threatening forces, but toward a goal of regeneration. Both patterns, as mythoi of strife and contention, serve a storyteller dealing with the anxieties of a culture at crisis. My hybrid methodology brings insights from several disciplines together to study the suasiveness of anxiety and fear materialized in sound, image, the sequence of these two media, and their roles in cultural depictions. Texts colonize the audience’s consciousness through aural and visual dimensions, as well as through the sequential arrangement of their trajectories. I argue that literary and rhetorical criticism can reveal fuller meaning through a hybrid methodology that accounts for the three dimensions. With my ‘sound’ enquiry, using a strategy I call ‘Aural Rhetoric,’ I contribute to the turn in humanities towards the epistemological significance of sounds and offer an analytical framework that brings out meanings lost to 'unhearing' criticism. With my second strategy, ‘Ocular Rhetoric,’ I further argue that film and novel imprint their audiences through input from the sense of sight or symbolic means that are visual. I scrutinize cinematic and prose scenes for auditory and visual implications of anxiety and fear, for ways that soundscapes, cinematography, and scenography manage an audience’s engagement with a story. With ‘Sequential Rhetoric,’ my third analytical regime, I argue that the arrangement of the aural and visual constitutes a logos, or sequential argument, in which pathos, or affective response, is induced and fostered.