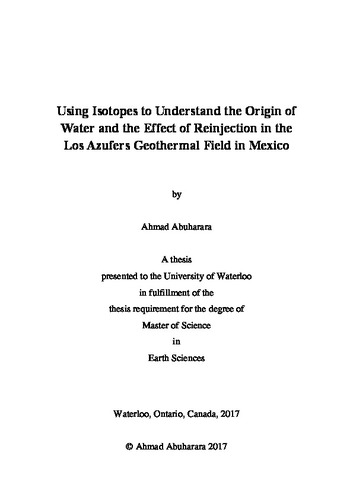 Los Azufers geothermal system is a convective-type geothermal system located northwest of Mexico City in the state of Michoacán at Mexico. Improvements in geochemical techniques enable a better investigation of the Tertiary and Quaternary geothermal reservoir in the Los Azufers field. Traditional stable isotope systems (18O, 2H), nontraditional stable isotope systems (37Cl, 81Br), radioactive isotopes (3H), and radiogenic isotopes (87Sr/86Sr), were utilized to investigate the groundwater geochemistry and detect the circulation of subsurface geothermal water, and consequently determine spatial anomalies in the geothermal activity. Isotopic data indicate recharging of the geothermal reservoir by meteoric water, where, surface water (meteoric water) infiltrated into the deeper sections of the reservoir’s formations due to the faulted and fractured structure of the volcanic formations in the Los Azufers field. The stable isotope results showed strong water–rock reactions in the study area, especially in the production zone, indicating the presence of former active fluid circulation systems because of the observed changes in temperature and pressure. Moreover, based on the 18O and 2H values, the infiltrating meteoric water mixed with andesitic (volcanic) water produced by water–rock interaction processes. The isotope compositions of the hot springs in the study area indicate direct communication between the surface and the reservoir, and also suggest lateral communication between some reinjection and production wells. The Sr concentrations and isotope ratios (87Sr/86Sr) revealed mixing among waters of different sources, and the extent of water-rock interaction with the different types of igneous rock (rhyolite, basalt, andesite) that formed the reservoirs. The 3H contents suggest a long residence time of deep waters in the reservoir and fingerprint the recharge of water from the surface to the reservoirs. The chlorine (δ37Cl) and bromine (δ81Br) isotopes were used to identify the different sources of waters, but because of the faults it was hard to see correlation in the results. The comparison of the 18O and 2H values obtained from the current study with those reported in previous studies suggests that waters are shifting toward andesitic type waters.

Ahmad Abuharara (2017). Using Isotopes to Understand the Origin of Water and the Effect of Reinjection in the Los Azufers Geothermal Field in Mexico. UWSpace. http://hdl.handle.net/10012/11271