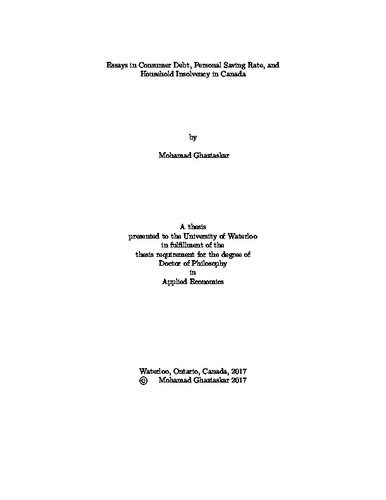 This thesis consists of three essays attempting to determine the key determinants of spending-saving behaviour and financial stability of Canadian households from both micro and macro economics. In the first chapter, we try to isolate and evaluate the socio-economic character- istics of households who accumulate debt by spending more than what they earn in a given year. In particular, with a focus on the right tail of spending distribution –households who tend to spend a larger fraction of their income– we use multivariate regression type analysis to isolate socio-economic factors that contribute to debt ac- cumulation and lead to insolvency. We aim to highlight the micro level factors that have contributed to the increase in the proportion of spender households in the population. Specifically, what are the marginal effects of age, income level, education, and family structure on the probability of a given households spends more than its income? Related to this question, we also consider the effect of budget allocation decisions on the probability of spending more than income and accumulating debt. We find that budget share of specific items in household consumption basket, has important information about the spending-saving behaviour of a household. Our analysis provides valuable information about what goods and services are the main outlays of expenditure for households in severe debt. The second chapter is about evaluating the relationship between household’s saving rate and its long-run income from a more technical perspective. This chapter is an attempt to address the possible endogeneity issue present in this relationship. In addition to the conventional and widely exercised methodology, three alternative approaches are considered, and in a Monte Carlo experiment, the performance of four approaches is tested in three different environments. Results of our analysis show that the conventional methodology outperforms only when there is a simple linear type of endogeneity in the model. However, when more complicated types of endogeneity are present, it fails to predict saving rate unbiasedly. In the end, using FAMEX and SHS datasets from Canada, we re-evaluate the question with all different methods. Our empirical analysis suggests that more affluent households do save a larger fraction of their income, and the results are consistent across different years not sensitive to different instruments. Finally, the third chapter looks at the household financial stability from a macroeconomic perspective. Using aggregate data, at the provincial level, on households insolvency rate, we try to point out important aggregate key factors in determining financial instability of households. In a series of panel regression analysis, we explore the effect of aggregate variables such as GPD, unemployment rate, housing prices, interest rate, and household debt level, on the insolvency rate of households. Moreover, in a panel vector autoregressive estimation, we attempt to investigate the interactive effects and consequences of insolvency rate and gross domestic product, while controlling for other related aggregate variables. The key finding is that higher levels of household debt are associated with higher insolvency rate, and insolvency rate has a negative impact on GDP.