An Exploration of Locality, Conservation Laws, and Spin 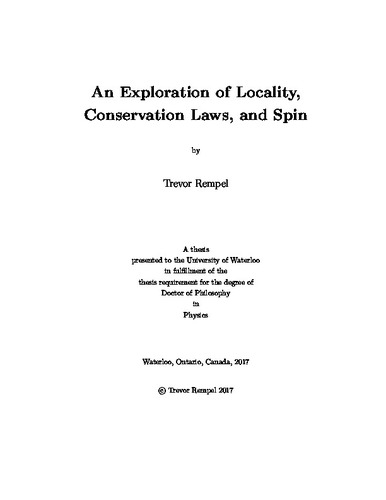 Conservation rules are central to our understanding of the physical world, they place re- strictions on how particles can move and dictate what can occur during an interaction. However, it is often taken for granted how a conservation law is implemented. For example, “conservation of momentum” is the condition that the sum of incoming and outgoing momenta equals zero. In particular, we place a constraint on the momenta by means of a linear function. The assumption of a linear conservation rule is intimately linked to both the geometry of momentum space and locality of the corresponding interaction. In this thesis we investigate the link between locality and conservation rules in a variety of settings. Part 1 is principally concerned with scalar particles. We begin by constructing the interaction vertex for an arbitrary scattering process in a generic spacetime, showing that curvature is not sufficient to induce a non-local interaction. Along the way we develop a notion of covariant Fourier transform which is used to translate between spacetime and momentum space in the presence of a non-trivial geometry. We also explore the effect on quantum fields of explicitly imposing non-locality via the “Relative Locality” framework. It is found that the fields depend, implicitly, on a fixed point in momentum space with fields based at different points related by a non-local transformation. On the other hand, all non-local behavior in the action can be concentrated in the interaction term. In the second part of this thesis we generalize the analysis of Part 1 to particles with internal structure, specifically spin. Of particular interest was the possibility that the presence of internal degrees of freedom could provide a sufficient modification of the vertex factor to allow for non-local interactions. Utilizing the coadjoint orbit method we develop a classical model of the relativistic spinning particle called the “Dual Phase Space” model (DPS) which allows for a coherent analysis of the vertex factor. We find that in addition to locality in the standard spacetime variable, interactions are “local” in a second “dual” spacetime variable. Inspired by this overt “duality” we show that DPS can be reformulated as a bilocal model. Specifically, DPS can be realized as the relativistic extension of a mechanical system consisting of two particles coupled by a rigid rod with fixed angular momentum about the center of mass. Interpreted in this way the model is easily quantized and yields the correct values for the spin quantum numbers. Next we consider a spinorial parameterization of DPS which is entirely first class and reveals several insights into how spin affects the dynamics of a relativistic particle. In particular, we find that the spin motion acts as a Lorentz contraction on the four-velocity and that, in addition to proper time, spinning particles posses a second gauge invariant observable which we call proper angle. The notion of a “half-quantum” state is also introduced as a trajectory which violates the classical equations of motion but which does not produce an exponential suppression in the path integral. In the final chapter of the thesis we explore an extension of the Dual Phase Space Model which includes continuous spin particles. This extended model is then generalized to deSitter spacetime where we present a fully covariant parameterization of the model.