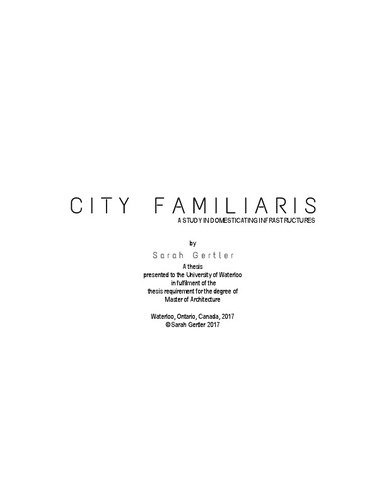 Hyper dense communities are becoming a norm in Canadian metropolitan areas. CityPlace within Toronto is considered by many the result of a good intentioned, but poorly planned version of this community. The model for its development is known as Vancouverism. The goal of this type is to create a livable, yet highly dense community. This is achieved through a criterion that guides the form and function of the buildings designed. The basic typology used is the podium-tower. The podium’s program/form promotes proper proportion and function at the street level, while the tower handles the required density. The resulting community suffers from formulaic designs that will meet the requirements created, but lacks the flexibility needed to enable usages outside of its prescribed spectrum of activities. The problem is that the standard resident of these communities based on their age and status, as young professionals, are prone to bring with them a being that does not fit within this prescribed spectrum, the dog. Dogs are abundant in these neighbourhoods and their presence clarifies the issue of inadequate accommodation. The communities lack the programmatic requirements necessary to care appropriately for these four legged residents. As a result, dogs will impede upon the territories and rights of others within the community. Areas that were never designed to handle the injurious impact of dog usages have been degraded, and the residents blame the perceived cause, the dog. In reality, the cause is poor planning and design. Therefore, the resulting backlashes against the dogs often fall flat or exacerbate the problem further. The current use of signage and restriction that vilify the dog’s very presence does not work because of this. It is the fault of built environment’s inability to allow for the dog, not the dog itself. This failure makes dog owners feel targeted, and other residents are left even more angry as their efforts of control are ignored. This problem is then compounded by the lack of appropriate consideration with the public spaces provided. They are either manicured to serve only very superficial functions of beautification or they are simply ignored and under-planned. The superficial ones are destroyed or misused as previously discussed, while the ignored, are just that, ignored. Unnecessary pressure from dogs are placed on spaces that cannot handle it while other territories still remain underused. The intent of this thesis is to lift away some of the deep seated rigidity in these communities in order to make them more open and accommodating to the perceived outsider that actually lives among them. CityPlace will be the testing ground. The proposed design will integrate into the existing fabric, spreading out dog usages throughout the neighbourhood in order to lessen the intensity that creates conflict. This will help in healing the rifts created by poor accommodation and help to reunite the residents of the neighbourhood. Dog owners will no longer feel threatened, other residents will not feel obstructed and dogs will be given what they require for happy, healthy lives.