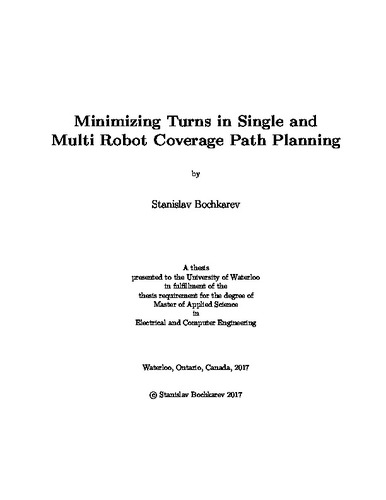 Spurred by declining costs of robotics, automation is becoming a prevalent area of interest for many industries. In some cases, it even makes economic sense to use a team of robots to achieve a goal faster. In this thesis we study sweep coverage path planning, in which a robot or a team of robots must cover all points in a workspace with its footprint. In many coverage applications, including cleaning and monitoring, it is beneficial to use coverage paths with minimal robot turns. In the first part of the thesis, we address this for a single robot by providing an efficient method to compute the minimum altitude of a non-convex polygonal region, which captures the number of parallel line segments, and thus turns, needed to cover the region. Then, given a non-convex polygon, we provide a method to cut the polygon into two pieces that minimizes the sum of their altitudes. Given an initial convex decomposition of a workspace, we apply this method to iteratively re-optimize and delete cuts of the decomposition. Finally, we compute a coverage path of the workspace by placing parallel line segments in each region, and then computing a tour of the segments of minimum cost. We present simulation results on several workspaces with obstacles, which demonstrate improvements in both the number of turns in the final coverage path and runtime. In the second part of the thesis, we extend the concepts developed for a single robot coverage to a multi robot case. We provide a metric χ that approximates the cost of a coverage path, which accounts for the cost of turns. Given a polygon, we provide a method for cutting a polygon into two that would minimize the maximum cost χ between the two polygons. Provided with an initial n-cell decomposition, we apply this method in the iterative manner to re-optimize cuts in order to minimize the maximum cost χ over all cells in the decomposition. For each cell in the re-optimized n-cell decomposition, a single robot coverage path is computed using the minimum altitude decomposition. We present the simulation results that demonstrate improvements in the maximum cost as well as the range of costs over all robots in the team.