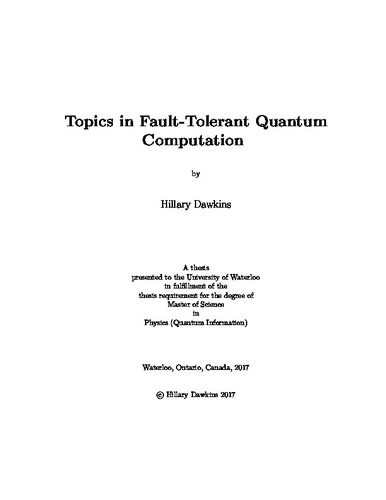 This thesis contains the results of research projects broadly related to the pursuit of universal fault-tolerant quantum computation. We are interested in questions such as which resources are required to achieve a quantum computational advantage, how to utilize such resources in practice, and how to characterize and control noise throughout a computation. In part 1, we cover results pertaining to magic state distillation, one of the leading approaches to implementing universal fault-tolerant quantum computation. Early work in this area focused on determining the region of distillable states for qubit protocols, yet comparatively little is known about which states can be distilled and with what distillable region for d>2. In the first project, we focus on d=3 and present new four-qutrit distillation schemes that improve upon the known distillable region, and achieve distillation tight to the boundary of undistillable states for some classes of states. As a consequence of recent results, this implies that there is a family of quantum states that enable universality if and only if they exhibit contextuality with respect to stabilizer measurements. We also identify a new routine whose fixed point is a magic state with maximal sum-negativity i.e., it is maximally non-stabilizer in a specific sense. In the second project, we return to d=2 and present a number of interesting new distillation routines based on small codes. Many of these distill noisy states right up to the boundary of the known undististillable region, while some distill toward non-stabilizer states that have not previously been considered. In part 2, we address the issue of noise characterization. The characterization of noise in a quantum system serves as a foundation towards meeting two important goals. Firstly, we may wish to know about specific sources of noise in order to adapt or correct errors as much as possible. Secondly, we would like a way to verify that noise is below some threshold value in order to meet the criteria of threshold theorems. We consider the case where noise is approximately known to coincide with the generalized damping channel (encompassing the common intrinsic processes of amplitude damping and dephasing), but may contain additional unknown noise sources. We provide methods to accurately obtain the noise parameters, and compare with the results of a randomized benchmarking experiment. Using this information, we show how to make meaningful statements about fault-tolerance threshold theorems by considering the diamond distance.