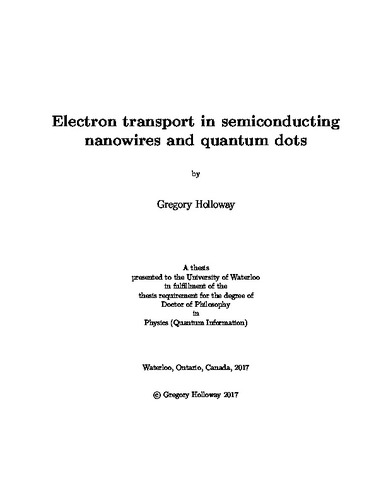 Single electrons confined in electrostatic quantum dots are a promising platform for realizing spin based quantum information processing. In this scheme, the spin of each electron is encoded as a qubit, and can be manipulated and measured by modulating the gate voltages defining each dot. Since each qubit is realized in a single quantum dot, one could imagine scaling up this system by placing many quantum dots together in a tightly packed array. To be truly scalable each qubit must exhibit minimal variation, such that their behavior is consistent across the entire device. Transport through these quantum dots must therefore be explored in detail, to determine the source of these variations and design strategies to combat their effects. In this thesis a study of the transport properties of InAs nanowires and Si quantum dots is presented. In both systems the close proximity of the conduction electrons to defect-prone surfaces or interfaces causes them to be very sensitive to the physical properties of these regions. Through cryogenic transport measurements, and the development of relevant physical models, the effects of surface states, oxide charge traps, and interface defects are explored. In general these defects possess a finite charge, which modifies the electrostatic potential and alters electron transport. These additional changes to the electrostatic potential are detrimental for spin based quantum information processing, which requires precise control of this potential. In addition, the severity of each of these effects can be different in each device, leading to variation which limits scalability. By studying these effects we aim to better understand their properties and origins, such that they can be mitigated. Static defects, such as surface states, are found to be a dominant source of scattering that limits mobility. In InAs nanowires, we find that these effects can be removed through growth of an epitaxial shell that physically separates the nanowire surface from the conducting core. Dynamic defects on the other hand, lead to charge noise that shifts the potential causing instability. This noise originates from charge traps in close proximity to the conduction channel. For nanowires, the native oxide that forms at the surface is a likely location for these traps to occur. Through removal of this oxide and replacement with a defect free dielectric shell, greatly improved stability is observed. To test the viability of these fabrication techniques, nanowires treated with the most promising surface processes are used to fabricate top-gated nanowire field effect transistors. These devices are used to realize electrostatically defined double quantum dots, which show well controlled transport properties and minimal charge noise. In Si, electron transport is studied in a pair of capacitively coupled metal-oxide-semiconductor quantum dots. Here, the capacitive coupling is used implement charge sensing, such that the electrostatic potential of one dot can be measured down to the single electron regime. The pair of dots is also used to implement a novel memristive system which demonstrates current hysteresis. This shows the versatility of this system and its capability to control individual electrons, similar to the requirements needed to implement spin based quantum information processing.