Interpretation of redox potential and assessment of oxyanion (As, Sb, Cr) mobility during oxic-anoxic oscillations 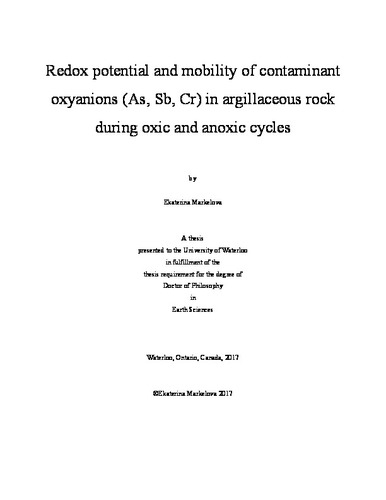 Electron transfer (redox) reactions are key processes in the biogeochemical functioning of natural systems. Redox reactions control the speciation and mobility of major elements (e.g., carbon, nitrogen, iron, and manganese) and environmentally important contaminants such as arsenic (As), antimony (Sb), and chromium (Cr). Nonetheless, the characterization of redox conditions and their effects on biogeochemical cycling and contaminant fate remain incompletely understood. The first part of this thesis focused on the interpretation of redox potential (Eh) measurements using results obtained in synthetic biogeochemical systems of increasing complexity under dynamic, redox-oscillating conditions. By progressively combining inorganic solutes, an organic electron donor (lactate), an aqueous electron acceptor (nitrate), a metabolically versatile heterotrophic bacterium (Shewanella oneidensis), and a solid-state electron acceptor (goethite), a full redox cascade from +500 to -350 mV (pH ∼7.4) was reproduced in the laboratory. The experimental results revealed that a conventional Pt redox electrode responds to a variety of physical, chemical, and microbial factors. In particular, the presence of the bacteria always led to lower Eh readings. In contrast, measurements of Eh in argillaceous suspensions were insensitive to changes in chemical ratios of the redox-sensitive, but non-electroactive, couples, including O2/H2O, CrO42-/Cr(OH)3, NO3-/NO2-/NH4+, HAsO42-/H3AsO3, and Sb(OH)6-/Sb2O3. Therefore, Eh measurements are shown to have limited usefulness in the natural systems depleted in electroactive redox couples, such as α-FeOOH(s)/Fe2+(aq). The second part of the thesis focused on the behavior of oxyanion contaminants under redox-oscillating conditions in the argillaceous subsoil suspensions. Successive cycles of oxic and anoxic conditions were imposed on the argillaceous suspensions amended with a mixture of oxidized Cr(VI), As(V), Sb(V), and N(V). Oxyanion mobility was investigated under sterile conditions, with the addition of labile organic carbon (ethanol), and with the addition of a topsoil microbial inoculum. Speciation analyses revealed irreversible reduction: freshly reduced As(III), Sb(III), Cr(III), and N(III) were not re-oxidized during subsequent oxic periods. Microbially induced reduction transformations decreased aqueous concentrations of Sb and Cr via mineral precipitation, removed N via volatilization, but retained As in solution. Microorganisms exhibited two distinct strategies of contaminant reduction. The first strategy involved the simultaneous reduction of CrO42-, HAsO42-, and Sb(OH)6- under aerobic and denitrifying conditions, as observed in the non-inoculated argillaceous suspensions. The second strategy involved respiratory reduction and followed the predicted thermodynamic order from highest to lowest energy production. In the argillaceous subsoil suspension enriched with topsoil inoculum, the reduction of terminal electron acceptors proceeded in the following order: O2, CrO42-, NO3-, HAsO42-, and Sb(OH)6-. In the third part of the thesis, the oxyanion mobility observed in the argillaceous suspensions (representative of a saturated, clay-rich subsurface environment from depths > 20 m) was further compared to oxyanion mobility in topsoil suspensions (representative of a near-surface soil < 0.01 m enriched in (hydr)oxide phases). The key differences between the topsoil and subsoil systems were the abundance of oxyhydroxide Fe and Mn minerals and the range of Eh values developed during redox cycles. The results indicated that in the topsoil suspensions, strong redox cycling of Fe and Mn correlated closely with the observed oscillating mobility of As and Sb. This correlation suggests a crucial role of oxyhydroxide minerals acting not only as major sorbents, but also as oxidants ultimately controlling the reversibility of contaminant sequestration. Overall, the argillaceous matrix, in contrast to the topsoil matrix, is shown to provide a more suitable environment for contaminant sequestration, as it can withstand periodical redox oscillations without releasing contaminants back to the aqueous phase, at least at the time-scale of the experiments.