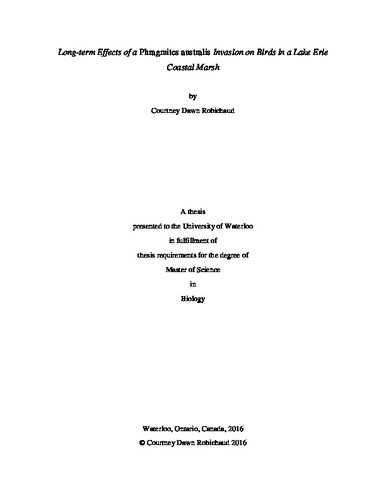 Invasive Phragmites australis threatens the integrity of essential bird habitat in coastal marshes. Located on the north shore of Lake Erie, Long Point, Ontario provides habitat to thousands of breeding and migrating birds, including marsh-nesting species in decline around the Great Lakes. Invasive P. australis has been colonizing these marshes since the late 1990s, when concerns prompted a survey of birds in invaded wetlands (2001-2002). My work evaluates birds in these wetlands after over a decade of P. australis expansion, comparing birds among P. australis and the vegetation communities it is displacing: cattail marsh, meadow marsh, and open-water marsh. I also examined bird community composition and functional traits to better capture the effects of P. australis invasion. I observed substantial changes since the 2001-2002 study was conducted. In 2015, total bird abundance was lower in P. australis than cattail marsh, with little difference in bird species richness among vegetation types. Bird community composition was distinct among all four vegetation types; however, P. australis supported a subset of bird species within cattail and meadow marsh habitat, rather than novel bird species. Phragmites habitat excludes many marsh-nesting species and provides habitat for shrub-nesting, foliage gleaner bird species. Marsh-nesters of conservation concern are restricted to remaining cattail and meadow marsh, and open-water habitat. My work indicates that the full effects of P. australis invasion may exhibit a lag time, and that community composition and functional traits should be considered when evaluating the effects of a biological invasion.