Skill mismatch in the labour market 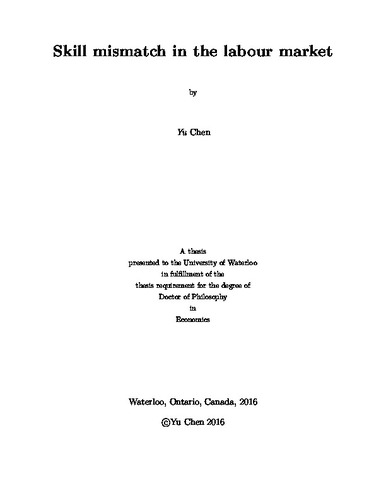 This thesis contains three chapters on skill mismatch in the labour market. Chapter 1 provides a theory of ex ante skill mismatch, which we define as a situation where firms create jobs that workers search for and accept, even though they do not make the most productive use of their skills. The core idea is that, in the presence of asymmetric information about workers' outside options, the value of on the job search is higher for workers employed in such jobs. The theory provides new insights into the returns to education as well as the impact of on the job search on labour market mismatch. It also provides an explanation for the declining fortunes of educated American workers in recent decades. Chapter 2 studies a competitive search equilibrium with exogenous skill mismatch, where educated workers apply to routine jobs only if they face a high cost searching for cognitive jobs. The purpose is to examine whether a simple model with exogenous mismatch can explain the adverse labour market outcomes of educated workers. Under a negative shock to routine jobs, the model fails to generate a fall in the employment rate together with a decline in the job-to-job transition rate. Compared to endogenous mismatch equilibrium, an equilibrium with exogenous mismatch does not incorporate the trade-o between job finding rates and wages when unemployed workers choose to search in different job sectors. The comparison suggests that understanding the mechanism of skill mismatch is essential to understanding the labour market outcomes of educated workers. Chapter 3 shows that displacement of high-school workers from routine jobs can be understood as the labour-market response to an adverse selection problem. The adverse selection problem arises because employment contracts do not systematically discriminate against education, even though over-qualified ed workers are relatively more likely to quit routine jobs. The labour market equilibrium distorts the labour market outcomes of high school graduates by in efficiently increasing their wage at the expense of higher unemployment rate, in order to separate them from overqualified ed college graduates. In addition, the labour market response to the adverse selection problem creates a demand for post-secondary vocational education, which is valuable because it acts as an entry barrier that prevents college graduates from using routine jobs as stepping-stones towards better jobs.