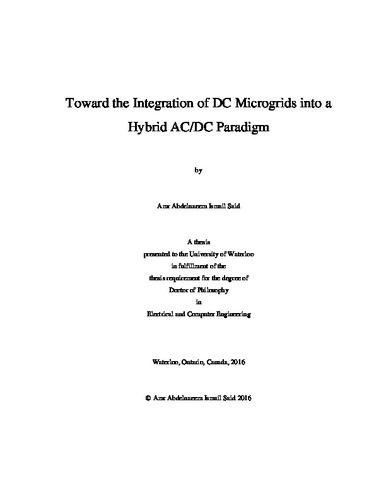 The recent penetration of distributed generation (DG) into existing electricity grids and the consequent development of active distribution networks (ADNs) have prompted an exploration of power distribution in a dc microgrid paradigm. Although dc power distribution has been implemented in aircraft, ships, and communication centres, the technology is still at an early stage and must be investigated with respect to technical feasibility when applied to distribution systems. In particular, the operation of a dc microgrid in both grid-connected and islanded modes and its integration into an existing ac infrastructure are subject to significant challenges that impede the practical realization of dc microgrids. On one hand, because the dc voltage profile is coupled with the injected active power at the system buses, it is seriously influenced by the intermittent nature of renewable resources such as solar and wind energy. In islanded operating mode, the presence of system resistance leads to a further trade-off between an appropriate system voltage profile and a precise power management scheme. On the other hand, the development of hybrid ac/dc microgrids introduces a fresh operational philosophy that enhances power sharing among ac and dc subgrids through the coupling of ac and dc steady-state variables. With these challenges as motivation, the primary goal of this thesis was to develop effective power management schemes and a steady-state analysis tool that can enable the reliable integration of dc microgrids into a smart hybrid ac/dc paradigm. Achieving this objective entailed the completion of three core studies: 1) the introduction of a robust control scheme for mitigating voltage regulation challenges associated with dc distribution systems (DCDSs) that are characterized by a high penetration of distributed and renewable generation, 2) the proposal of a supervisory control strategy for precise DG output power allocation that is based on DG rating and operational costs yet guarantees an appropriate voltage profile for islanded dc microgrids, 3) the development of an accurate and comprehensive power flow algorithm for analyzing the steady-state behaviour of islanded hybrid ac/dc microgrids, and 4) the optimization of hybrid ac/dc microgrids configuration. As the first research component, a novel multi-agent control scheme has been developed for regulating the voltage profile of DCDSs that incorporate a large number of intermittent energy sources. The proposed control scheme consists of two sequential stages. In the first stage, a distributed state estimation algorithm is implemented to estimate the voltage profile in DCDSs, thus enhancing the interlinking converter (IC) operation in regulating the system voltages within specified limits. If the IC alone fails to regulate the system voltages, a second control stage is activated and executed through either equal or optimum curtailment strategy of the DG output power. A variety of case studies have been conducted in order to demonstrate the effectiveness, robustness, and convergence characteristics of the control schemes that have been developed. The second element of this research is a multi-agent supervisory control that has been created in order to provide precise power management in isolated DC microgrids. Two aspects of power management have been considered: 1) equal power sharing, which has been realized via a proposed distributed equal power sharing (DEPS) algorithm, and 2) optimal power dispatch, which has been achieved through a proposed distributed equal incremental cost (DEIC) algorithm. Both algorithms offer the additional advantage of affording the ability to restore the average system voltage to its nominal value. Real-time OPAL-RT simulations have demonstrated the effectiveness of the developed algorithms in a hardware-in-the-loop (HIL) application. The third part of the research has introduced a sequential power flow algorithm for hybrid ac/dc microgrids operating in islanded mode. In contrast to the conditions in grid-connected systems, variable rather than fixed ac frequencies and dc voltages are utilized for coordinating power between the ac and dc microgrids. The primary challenge is to solve the power flow problem in hybrid microgrids in a manner that includes consideration of both the absence of a slack bus and the coupling between the frequency and dc voltage though ICs. In the proposed algorithm, the ac power flow is solved using the Newton-Raphson (NR) method, thereby updating the ac variables and utilizing them accordingly in a proposed IC model for solving the dc problem. This sequential algorithm is iterated until convergence. The accuracy of the algorithm has been verified through detailed time-domain simulations using PSCAD/EMTDC, and its robustness and computational cost compare favourable with those of conventional algorithms. The final part highlights the implementation of the developed steady-state models in obtaining an optimum hybrid microgrid configuration. The system configuration could be manipulated by changing the DG droop settings as well as the network topological structure. The contribution of both approaches has been investigated, through an optimum power flow (OPF) formulation, in improving the system loadability as the primary measure of the hybrid microgrid performance.