Examining the Livability of a Day Program for Individuals with Alzheimer’s Disease and Other Memory-related Disorders: A Case Study of The Dotsa Bitove Wellness Academy 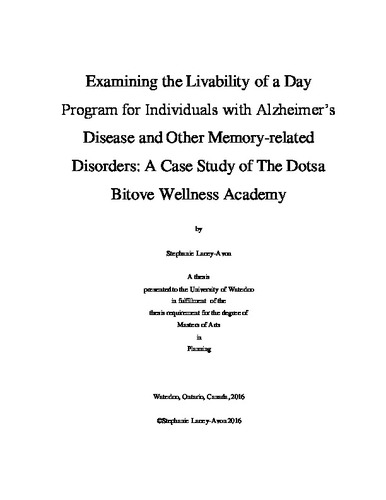 The number of people affected by Alzheimer’s disease and other memory-related disorders (ADMRD) is increasing at substantial rates. A specific challenge for planners is to build non-institutional environments that can accommodate the desire to age in place for this demographic. Planning initiatives that support ageing in place are embedded within broader healthy community objectives of creating livable communities. Livable communities are intended to positively influence the quality of life of all individuals. However, the inherent problem pervasive in literature is to understand how livability objectives overlap with ageing in place objectives (CMHC, 2008). Adult day programs have been identified as an effective type of community-based care to assist those with dementia to age in place. The focus of this study was to take the concept of livability and consider its applicability to an academy for those with dementia in Toronto. Through this, findings seek to provide information on how physical and social environmental characteristics influence livability of adult day programs for those with dementia. This study was guided by the following research objectives: 1) to assess the role of physical and social environments when considering the livability of an academy; 2) to identify whether livability is an appropriate measure of small-scale environments such as the academy and whether the concept is appropriate for ADMRD populations; and 3) to determine if adult day programs are an effective solution for mitigating rising care needs for those with ADMRD. A mixed methods case study approach was used. Data collection techniques included a built environment audit, time-lapse mapping, an art-analysis, and covert-overt observations. Results from this study suggest the academy effectively incorporated both physical and social environmental elements, contributing towards a cohesive space. As well, livability can be measured in small-scale environments such as the academy and capture the needs of those with ADMRD. Livability is widely used in planning policy as a term to coin environments that are desirable, healthy, and enhance community well-being (Ontario Ministry of Infrastructure, 2006). Findings recommend for planners to retrofit and ensure that the concept of livability encompasses quality of living standards for all ages in order to make an integrated approach to decision-making. As well, adult day programs should be recognized in zoning by-laws as a stand-alone use, and regarded as an effective way to mitigate rising care needs for those with ADMRD. There are changes beginning to take place within the built form, such as the promotion of Smart Growth development, although a complete paradigm shift from the way environments were conventionally planned will take some time.

Stephanie Lacey-Avon (2016). Examining the Livability of a Day Program for Individuals with Alzheimer’s Disease and Other Memory-related Disorders: A Case Study of The Dotsa Bitove Wellness Academy. UWSpace. http://hdl.handle.net/10012/11035