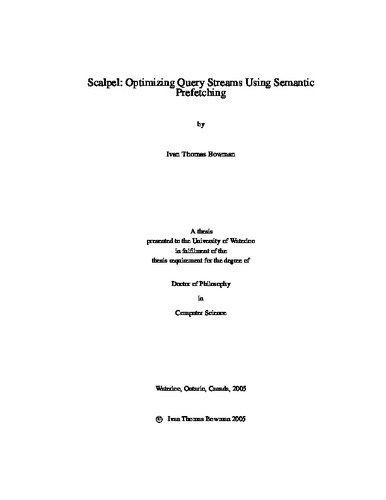 Client applications submit streams of relational queries to database servers. For simple requests, inter-process communication costs account for a significant portion of user-perceived latency. This trend increases with faster processors, larger memory sizes, and improved database execution algorithms, and this trend is not significantly offset by improvements in communication bandwidth. Caching and prefetching are well studied approaches to reducing user-perceived latency. Caching is useful in many applications, but it does not help if future requests rarely match previous requests. Prefetching can help in this situation, but only if we are able to predict future requests. This prediction is complicated in the case of relational queries by the presence of request parameters: a prefetching algorithm must predict not only a query that will be executed in the future, but also the actual parameter values that will be supplied. We have found that, for many applications, the streams of submitted queries contain patterns that can be used to predict future requests. Further, there are correlations between results of earlier requests and actual parameter values used in future requests. We present the Scalpel system, a prototype implementation that detects these patterns of queries and optimizes request streams using context-based predictions of future requests. Scalpel uses its predictions to provide a form of semantic prefetching, which involves combining a predicted series of requests into a single request that can be issued immediately. Scalpel's semantic prefetching reduces not only the latency experienced by the application but also the total cost of query evaluation. We describe how Scalpel learns to predict optimizable request patterns by observing the application's request stream during a training phase. We also describe the types of query pattern rewrites that Scalpel's cost-based optimizer considers. Finally, we present empirical results that show the costs and benefits of Scalpel's optimizations. We have found that even when an application is well suited for its original configuration, it may behave poorly when moving to a new configuration such as a wireless network. The optimizations performed by Scalpel take the current configuration into account, allowing it to select strategies that give good performance in a wider range of configurations.