EVOLUTION OF LAKE ERIE BASED ON THE POSTGLACIAL SEDIMENTARY RECORD BELOW THE LONG POINT, POINT PELEE, AND POINTE-AUX-PINS FORELANDS 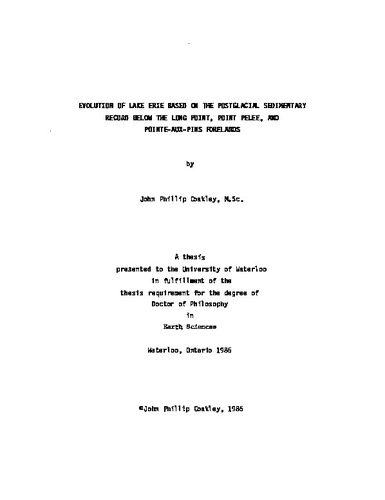 The postglacial geological history of Lake Erie was interpreted primarily on the basis of borehole sedimentary sequences below the major accretionary forelands: Long Point, Point Pelee, and Pointe-aux-Pins. These data were complemented by a number of sedimentary profiles from other boreholes in and around the lake, radiocarbon and pollen-based dating of postglacial sediments, relic geomorphological features, and geometrical and sedimentary data from inflowing streams. Trends in sediment properties in the basal portion of the sequences consistently show an abrupt change from glacial sediments (Unit 1), topped by an eroded surface, possibly sub-aerially exposed, to postglacial silty clays deposited in deep- or quiet-water environments (Unit 2). As topographic lows were infilled and water depths decreased, the mean grain size increased, reflected in an increasing frequency of sandy laminations (Unit 3). This transitional unit is usually topped by an erosional unconformity, suggesting non-deposition and reworking prior to the deposition of well-sorted, medium sand (Unit 4) at the top of the sequence. Deposition of the top unit began around 5000 years B.P., and clearly occurred in an upper shoreface setting where saltation and bottom traction were the predominant transport modes. This change probably marks the initiation of spit formation at the sites. All boreholes exhibit a clear coarsening-upward textural trend, suggestive of lateral migration of the higher-energy upper shore face (spit) facies over lower shoreface and lagoonal facies. Combined with the radiocarbon dates and other data, the above sediment interpretation suggests important revisions to earlier interpretations of postglacial lake levels in the Lake Erie basin. Moreover, the lake level curve presented here confirms glacioisostatic rebound of the lake outlet as a major factor in the initial lake level trend, but it also suggests that other processes (such as the changing pattern of inflows from the Upper Great Lakes, the nature and postglacial tectonics of the lake outlet, and paleoclimatic influences) could have become important in the later stages. The above data were used in a hypothetical reconstruction of Lake Erie paleogeography, including the three major forelands of the north shore. The inferred form of the contemporary shoreline, and the evolutionary trends indicated by beach-ridge patterns on the forelands themselves, suggest that these forelands did not result from conventional spit formation. Rather, their origin is due primarily to the effectiveness of cross-lake moraines in Lake Erie as sand-accumulation sites. The evolution of the forelands over the past 3000 years involves persistent erosion and shoreward transgression under the influence of rising lake levels, in a manner analogous to the ongoing retreat of barrier islands on marine coasts.