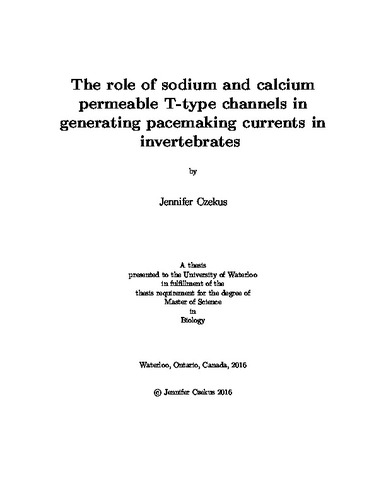 T-type calcium channels (Cav3) play a key role in generating rhythmic action potentials in excitable cells such as the heart pacemaker and sleep-wake cycles in the thalamus. T-type channels are low voltage-activated channels, which can be opened near rest to cause an inward current that leads to membrane voltage rising to threshold to generate rhythmic action potential ring. The upstroke of the ventricular action potential in the vertebrate heart is attributed mostly to the cardiac-specfi c voltage-gated sodium channel, Nav1.5. Sodium channels are not expressed in the invertebrate heart, such as Lymnaea stagnalis. Instead, the major inward conductances of the invertebrate heart are due to voltage-gated calcium channels. The invertebrate pond snail, Lymnaea stagnalis, heart expresses T-type calcium channel, LCav3, which is alternatively-spliced in exon 12, generating a highly sodium selective T-type channel (with exon 12a) compared to a more calcium ion selective channel isoform (with exon 12b). The sodium permeant, LCav3-12a channel is the only T-type channel expressed in the heart, while LCav3-12b is more exclusive to the secretory glands, such as prostate and albumen. Our goal is to understand the functional consequence of diff ering sodium and calcium ion selectivities of T-type channels for the generation of rhythmic pacemaking in native tissues by conducting elecrophysiology experiments on dissociated ventricle cells and constructing a qualitative mathematical model of the invertebrate ventricular action potential. Mathematical models for both LCav3-12a and LCav3-12b T-type currents were constructed and implemented using current models from the Kyoto model, a guinea pig ventricular action potential model, to reflect the currents found in Lymnaea stagnalis. LCav3-12b had a smaller pacemaking current and showed slower rate of spike generation opposed to LCav3-12a which had a larger current and faster pacemaking activity. Spiking activity was not abolished with simulated T-type current block but had the greatest e ffect on rate of pacemaking. Simulations involving reduced current conductance or varying ion concentration show that LCav3 was primarily responsible for generating pacemaking activity and initiating the action potential upstroke.