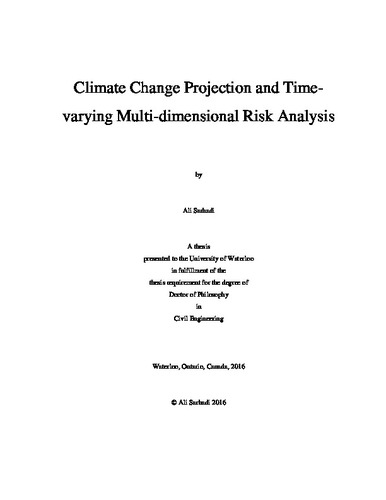 In recent decades, population growth and global warming consequent to greenhouse gas emissions because of human activities, has changed the atmospheric composition leading to intensifying extreme climate phenomena and overall increase of extreme events. These extreme events have caused human suffering and devastating effects in recent record-breaking warming years. To mitigate adverse consequences arising from global warming, the best strategy is to project the future probabilistic behavior of extreme climate phenomena under changing environment. The first contribution of this research is to improve the predictive power of regression-based statistical downscaling processes to accurately project the future behavior of extreme climate phenomena. First, a supervised dimensionality reduction algorithm is proposed for the statistical downscaling to derive a low-dimensional manifold representing climate change signals encoding of high-dimensional atmospheric variables. Such an algorithm is novel in climate change studies as past literature has focused on deriving low-dimensional principal components from large-scale atmospheric projectors without taking into account the target hydro-climate variables. The new algorithm called Supervised Principal Component analysis (Supervised PCA) outperforms all of the existing state-of-the-art dimensionality reduction algorithms. The model improves the performance of the statistical downscaling modelling through deriving subspaces that have maximum dependency with the target hydro-climate variables. A kernel version of Supervised PCA is also introduced to reduce nonlinear dimensionality and capture all of the nonlinear and complex variabilities between hydro-climate response variable and atmospheric projectors. To address the biases arising from difference between observed and simulated large-scale atmospheric projectors, and to represent anomalies of low frequency variability of teleconnections in General Circulation Models (GCMs), a Multivariate Recursive Nesting Bias Correction (MRNBC) is proposed to the regression-based statistical downscaling. The proposed method is able to use multiple variables in multiple locations to simultaneously correct temporal and spatial biases in cross dependent multi-projectors. To reduce another source of uncertainty arising from complexity and nonlinearity in quantitative empirical relationships in the statistical downscaling, the results demonstrate the superiority of a Bayesian machine-learning algorithm. The predictive power of the statistical downscaling is therefore improved through addressing the aforementioned sources of uncertainty. This results in improvement of the projection of the global warming impacts on the probabilistic behavior of hydro-climate variables using future multi-model ensemble GCMs under forcing climate change scenarios. The results of two Design-of-Experiments also reveal that the proposed comprehensive statistical downscaling is credible and adjustable to the changes under non-stationary conditions arising from climate change. Under the impact of climate change arising from anthropogenic global warming, it is demonstrated that the nature and the risk of extreme climate phenomena are changed over time. It is also well known that the extreme climate processes are multi-dimensional by their very nature characterized by multi-dimensions that are highly dependent. Accordingly, to strength the reliability of infrastructure designs and the management of water systems in the changing climate, it is of crucial importance to update the risk concept to a new adaptive multi-dimensional time-varying one to integrate anomalies of dynamic anthropogenically forced environments. The main contribution of this research is to develop a new generation of multivariate time-varying risk concept for an adaptive design framework in non-stationary conditions arising from climate change. This research develops a Bayesian, dynamic conditional copula model describing time-varying dependence structure between mixed continuous and discrete marginals of extreme multi-dimensional climate phenomena. The framework is able to integrate any anomalies in extreme multi-dimensional events in non-stationary conditions arising from climate change. It generates iterative samples using a Markov Chain Monte Carlo (MCMC) method from the full conditional marginals and joint distribution in a fully likelihood-based Bayesian inference. The framework also introduces a fully Bayesian, time-varying Joint Return Period (JRP) concept to quantify the extent of changes in the nature and the risk of extreme multi-dimensional events over time under the impact of climate change. The proposed generalized time-dependent risk framework can be applied to all stochastic multi-dimensional climate systems that are under the influence of changing environments.