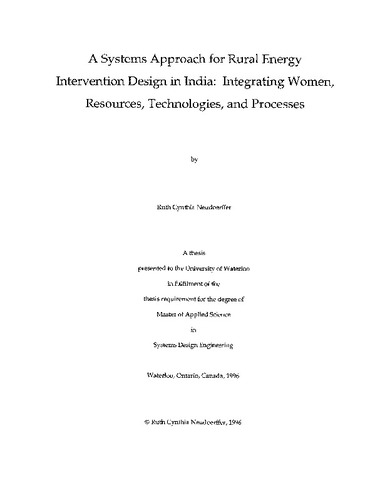 One of the greatest challenges facing a developing country such as India is how to meet the domestic energy needs of a substantial and growing rural population in an ecologically sustainable manner. Over the past three decades, numerous piecemeal attempts, such as Improved Cookstove Programmes, Biogas Development, and Social Forestry, have been made in the rural areas as a panacea to combat the varied and combined aspects of the rural energy crisis: the deleterious effects of inefficient combustion technologies, indoor smoke, deforestation, and drudgery for women. These efforts have had limited success primarily because they failed to consider the felt needs of the intended rural beneficiaries and failed to recognise the interconnectedness of the multifarious aspects of the rural energy problem. Based on the premise that the rural energy crisis must be understood as a whole system problem, a systems approach to planning and designing rural energy interventions, emphasizing the full participation of rural women - the primary users of the domestic energy technologies - is proposed. System modelling is an integral element of this systems approach. Accordingly, as a key component of the proposed intervention design methodology, a mathematical model of the domestic cooking energy system is developed. The purpose of this model is to allow policy planners to better understand the structure and function of the domestic energy system and to investigate the potential impacts on this system of various renewable energy technology interventions. A conceptual model of the domestic rural energy system is first devised. This abstraction establishes the fundamental interactions among the system's four basic components: resources, technologies, tasks, and people. This model is then translated into a mass-energy mathematical model and several new components are created to specifically allow the incorporation of the household decisions. In the model, the various components, such as the different stoves, buffaloes, and the agricultural fields, are represented as material transformation processes; the inputs to the model are environmental resources, such as fuelwood; and the outputs of the model are cooking demands or the kcals of energy required to meet the daily cooking demands of the household, disaggragated by cooking task. The utility of the model for understanding both the domestic cooking energy scenario and the impact of alternative renewable energy interventions for one household is presented in a detailed example, based on field data collected in India. The extension of the model to village level energy intervention planning also is demonstrated through a detailed example investigating the impact on village level resource consumption of four different cooking energy scenarios. Finally, the results of a real world intervention design exercise to introduce the use of crop residue briquettes as a fuel in the place of traditional dung cakes, conducted in the village of Gari Natthe Khan, Haryana, are given. This latter example illustrates how the systems approach for rural energy intervention design may actually be used by an intervention agency, such as a local non-governmental organization. The model demonstrates a very effective tool for understanding the complex structure and interactions which comprise the rural domestic cooking energy system. The results also clearly indicate the natural resource savings, at both the household and village level, which may be achieved by the adoption of renewable energy technologies such as improved cookstoves ( chulhas) and biogas plants. Further, the success of the crop residue briquetting intervention activity in Gari Natthe Khan, designed following the systems approach presented here, illustrates the potential for rural energy intervention design when a holistic and women-centred approach is taken.