The Interdependency of Myth and Magic in the Fionavar Tapestry 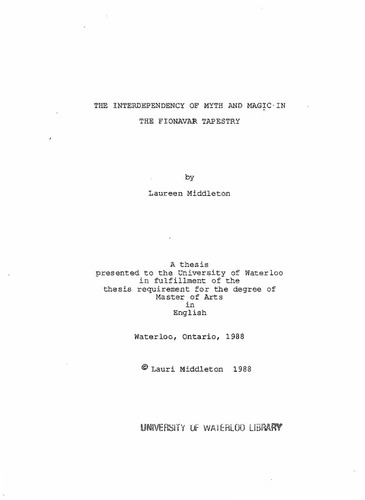 Guy Gavriel Kay's high fantasy trilogy, The Fionavar Tapestry, contains an intricate system of mythological and magical interdependencies. Myth and magic are presented in the light of a traditional interaction, with a contemporary embellishment created in the nature of their interdependency. The magical rituals previously seen in mere association with myth are consolidated, becoming integral aspects of mythical expression. The evolution of a society from dependence on the gods to a reliance on mortal strength and ability is a clearly developed growth pattern that stems from the resolution of mythic and magic interweavings. The religion of the Mother Goddess and the importance of her earth magic decrease in importance through the development of human feeling, embodied in the High Priestess Jaelle. Likewise, the sky magic and power of the god Mornir is lessened through a mortal interloper, who must carry the power of the god but can only use it precisely because he is mortal. Increasing reliance on purely human gifts and strengths carries the interdependency of myth and magic through to its inevitable conclusion, in the mastery of man over his own destiny through the exercise of free will. In episodes such as the hanging of Paul on the Summer Tree, the sacrifice of Liadon, and the Cader Sedat sequence, myth is shown to be dependent upon magic in order to be renewed or re-enacted, and fully expressed. Through a similar analysis of these episodes and the structural role of myth in the trilogy, magic is in turn shown to be dependent upon myth for its existence and justification in Fionavar.