Salacious Sade and Perverted Poe: Perversity and the quest for knowledge from 1740 to 1895 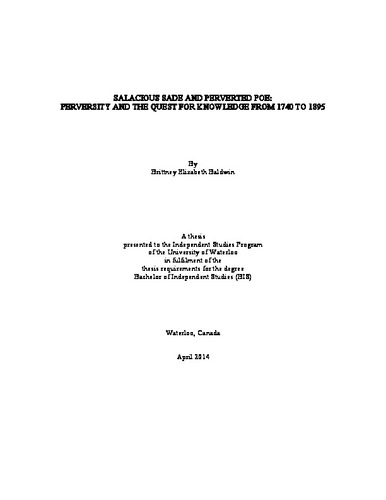 The purpose of this thesis is to examine the role of perversity within the Self as a quest for individual knowledge. Libertine and Gothic literature will be characterized as an individualized reflection on society’s fragmented role as part of the Whole. I will discuss how Libertine and Gothic literature utilize the supernatural, the cloister, and melodrama to characterize the fluidity within gender and sex. In turn, I will locate the essence of perversity in literature between 1740 and 1895 as an intellectual pursuit and an ideology of independence. The time period I have chosen to examine encompasses the lives and deaths of the authors I am analyzing, from the birth of Donatien Alphonse François de Sade (also known as the Marquis de Sade) in 1740, to Leopold von Sacher-Masoch’s death in 1895. I will illustrate how perversion and radical individualism creates personal freedom that also works to undo widespread attempts at systematic authority while paradoxically depending on the very norm it seeks to pervert.