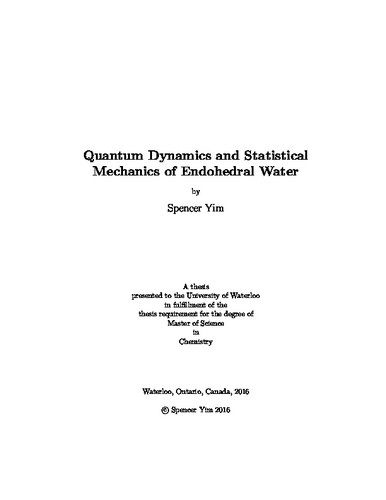 Since first being synthesized in 2011,H2O@C60 has attracted much attention in the literature. Many interesting quantum phenomena are associated with this system, including ortho-para conversion, rotational ground state splitting, and long-range dipole correlations. The work presented here covers the theory required to model such a system as well as detailing two projects that were undertaken in order to develop tools to study H2O@C60. Path integral molecular dynamics simulations were utilized to gain an understanding of the thermodynamic properties such as position and orientation densities, and imaginary-time autocorrelation functions (ITACFs) were investigated and compared to those of a free water molecule. In order to gain access to energy levels directly, code was also developed in order to diagonalize the Hamiltonian for the system and obtain the exact energy levels variationally. The code that was written for this purpose is very general and can easily be applied to a wide number of similar systems, including di erent guest/host molecules.