The Efficacy of an Ergonomics Education Program on Sit-Stand Workstation Usage Behaviours: A Field Intervention Study 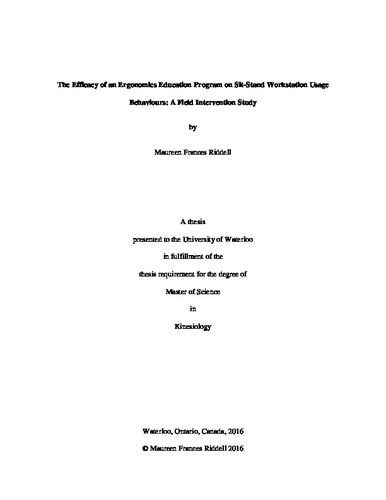 Abstract Background: Much is known about the negative aspects of sitting and standing for long periods of time. In recent years there has been a shift in office furniture from non-height adjustable workstations to those that fully accommodate sitting and standing whole body postures. In the past, the integration of sit-stand desks has shown positive but also negative consequences such as pain development or minimal use of the new workstation. Outcomes depend fundamentally on the training that new users of sit-stand workstations receive. Currently, there is no standardized training program provided to users on how they should integrate their new workstations into their day to ensure optimal use of the workstation. The objective of this research study was to determine if a training program that new users of sit-stand workstations received prior to their implementation could influence the long term usage of the workstations. It was hypothesized that the type of training program that individuals received would influence how much they would use the workstation over a period of two months, would influence reports of musculoskeletal discomfort, and influence mood states. Methods: Thirty-five adults between the ages of 23 and 64 were recruited from a University of Waterloo research centre to assess the influence of training program on the long term usage of sit-stand workstations. Participants were divided into 1 of 2 groups based on their job tasks, age and sex. A baseline period (Phase 1) was collected as participants worked at their original non height adjustable workstations. Both groups received an initial training program that was an example of what is currently taught in industry. The one group then received an additional session that focused on transitioning between sitting and standing and proper sitting and standing techniques. The first four weeks after the training sessions represented the intervention phase (Phase 2) of the study. During this time, those in the group who received the additional training program also received weekly meetings from the experimenter to answer any questions that the participants had regarding their workstation as well as daily reminders to rotate between sitting and standing in a 1:1 ratio. These meetings were stopped for the subsequent four weeks as this time period acted as the follow-up phase (Phase 3). Desk transitions from sitting to standing were tracked using tri-axial data logging accelerometers that were securely mounted to each participants’ desk (Gulf coast solutions, Waveland, Mississippi) and a measure of self-perceived sitting and standing throughout the day was taken using the Occupational Sitting and Physical Activity Questionnaire. Musculoskeletal pain score was collected on a nine point Likert scale. The Active Hip Abduction Test was collected at the beginning and end of the study to determine if any differences occurred between groups. Lastly, the Profile of Mood States questionnaire was collected to determine if any changes in mood states would occur throughout the study. Results: There was a main effect of group (p<0.0001) for the number of transitions completed each day. On average, those in the group that received the additional training session based on current best practice research transitioned 6.0 (±2.1) times a day whereas those who only received a training session that is currently delivered in industry transitioned 3.2 (±1.9) times each day. There was no main effect of phase (p=0.1161). There was a main effect of group p=0.0473 and phase p<0.0001 for self-reported time spent sitting each day as collected via the Occupational Sitting and Physical Activity Questionnaire. There was no effect of group or time on the musculoskeletal pain reported in the lower back, buttocks, and feet region. There was an influence of phase for neck pain and right and left shoulder pain. Group influence the percentage of days that pain was reported in the right and left shoulder regions. The percentage of days that pain was reported was higher for those who received the additional training session. Overall, those in the additional group reported sitting 6% less than those who received the industry example training. There was a main effect of group p=0.0401 and a main effect of period of p<0.0001 for self-reported time spent standing via the OSPAQ. Overall, those who received the additional training session reported standing 6% more than those who did not. Those who received the additional training session had fewer days where they did not use their workstation at all (p=0.0002). There was an influence of group on the mood state anger and depression. Those who received only the industry training session reported lower anger and depression scores by 1.3 and 1.2 respectively. Scores for confusion decreased in both groups as the study progressed (p<0.0001). There was no influence of group on the amount that participants walked each day as assessed by the Fitbit Zip (p=0.6934) and by the Occupational Sitting and Physical Activity Questionnaire (p=0.6174). There was an influence of outcome on the Active Hip Abduction Test (AHABD) on the number of days that pain occurred. Those who scored positive on the AHABD test reported more pain than those who scored negative. Discussion: Those who received the additional training session prior to using their sit-stand workstation transitioned more often than those who only received the training session that was an example of what is currently bring completed in the industry. They also reported less time spent sitting throughout the day and more time spent standing. One of the major problems with the implementation of sit-stand workstations, as reported by industry practitioners and researchers, is the discontinued use of sit-stand workstations as time progresses. The current study found that with the delivery of a training program that was based on current best research practice in the topic of sit-stand workstation usage, there were less days where the workstation was not used at all. Behaviour change techniques, motivational interviewing approaches and hands on practice with the workstation should be incorporated into future training programs to develop sustainable habits centered around whole body posture variation.