Master Thesis Narrative Search for the Golden Spikes. Analyzing the Anthropocene in Theory and Fiction. 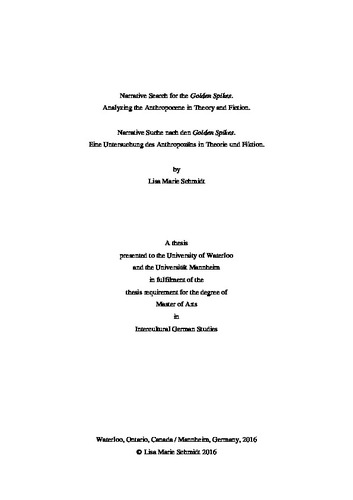 The term Anthropocene, according to an increasing number of scientists, describes the recent stadium of Earth History, having opened with the industrialization. Terminologically and conceptually, it refers to the triggering of telluric processes such as anthropogenic climate warming, which solely derive from human activity, and should replace the current state of the Holocene. Exceeding his originative fields of geology and environmental sciences, the term currently presents itself as a concept with a growing potential for boom. Demonstrating a growing lexematic relevance and a conceptual fertile ground for descriptive models of tilting or turning points, describing the current state of humanity as upheaval, the Anthropocene contains a potential for diagnosing and overcoming disciplinary boundaries between sciences and humanities, exceeding not just the dimension of climate change but also other traditional political, social and fictional dimension of dystopian forecasts. Its fruitfulness has triggered extensive analyses of the conceptual implications of the anthropocentric idea by renowned institutional and staffing sizes of histories of arts and culture, philosophy and literary studies, sociology, economic and legal sciences. When it comes to its ratification, the latter disciplines are even ahead of its original subjects, and its phenomenology has recently been fortifying remarkably diversified interpretations and interpretations of the Human Factor. Against this background, the thesis examines both the theoretical and fictional realms of the Anthropocene as human self-description. In doing so, it delivers two parts of an explanation why both hard sciences and humanities depend on fictional elements whenever making an attempt of self-description: The Anthropocene mixes historical regrets, guilt, as well as projections, discussions, transfigurations and models for the future. Therefore, the literary analysis furthermore presents an outline of the poetic, narrative, typological and aesthetic means of its imaginative con- and destruction, illustration, interpretation and analysis. Therefore, the discussion of the Anthropocene is put against the background of culturephilosophical and historical traditions such as those of Adorno (1944; 1941; 1958 i.a.), Foucault (1969, 1976, 2004) and Benjamin (1969, 1974, i.a.). Special attention is paid to the concept of the Posthuman (Braidotti 2013), Horn’s (2014) idea of future as catastrophe, the geopolitics of literature (Werber 2014) and the approach of the post-souvereign narrative (Schaffrick et al 2015). In doing so, the thesis identifies locality as the main category of human “roots” and the concept of agency.