Act Small and Think Big: Exploring the Plurality and Complexity of Shrinking Cities 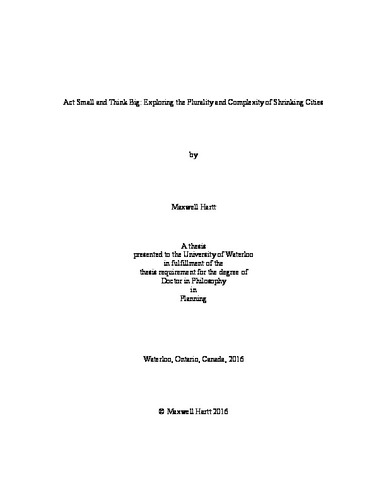 Demographically and economically, there is an ongoing global shift that has resulted in the uneven development and distribution of monetary, human and knowledge capital, and the emergence of global and shrinking cities. The ability of local planners and decision-makers in shrinking cities to effectively manage population loss and economic decline has been limited by the deficiency of available strategies to address the challenges of shrinkage and the stigma of shrinkage within the growth-oriented culture of planning. Although the causes urban shrinkage have been widely discussed, little research has explored the complexity and diversity of the various processes contributing to urban shrinkage. A two-dimensional shrinking city trajectory typology encompassing both economic and demographic change is developed as a baseline approach to discussing, depicting and classifying shrinking cities. The diversity of urban shrinkage experiences is demonstrated through the examination of the twenty largest American cities to lose population between 1980 and 1990 - fifteen of the twenty cities experienced varying degrees of population loss while simultaneously showing signs of economic growth. The diversity and complexity of urban shrinkage is further explored using a novel cross-correlation network analysis approach to disentangle the complex processes contributing to and stemming from population loss. Two Canadian shrinking municipalities, Chatham-Kent, Ontario and Cape Breton Regional Municipality, Nova Scotia are examined over a period of seventeen years (1997-2013). Results indicate that factors in the urban shrinkage process are strongly interrelated and exhibit circular trends and feedback mechanisms. The analysis also shows significant regional differentiation as each case study has a unique set of processes that preceded population loss. However there were commonalities between the distinct cross-correlation networks. Specifically, unemployment, employment and labor participation rates were indicative of immigration and emigration trends, changes in unemployment were inversely related to housing permit rates and intraprovincial migration was strongly linked to changes in housing starts and completions. Lastly, a shrinkage strategy transferability framework is developed to explore the diversity of local decision-makers’ perceptions of the applicability of shrinkage strategies. The framework is applied to the two Canadian shrinking municipalities to evaluate the transferability of a service rightsizing strategy. Although deemed compatible and transferable by the author and six key informants, the strategy was ultimately considered inapplicable in both municipalities due to governance barriers. Despite similar conclusions, local perceptions of shrinkage and response strategies were found to be influenced by differences in geographic location and longevity of shrinkage. This dissertation contributes to our understanding of the diversity and complexity of urban shrinkage experiences by (1) challenging the reliance on population change as the sole indicator of urban shrinkage trajectories, (2) demonstrating the complexity and distinctiveness of urban shrinkage processes and (3) advancing that the duration of shrinkage and local perceptions are tied to the stage of deindustrialization and the changing demographic makeup of the municipality.