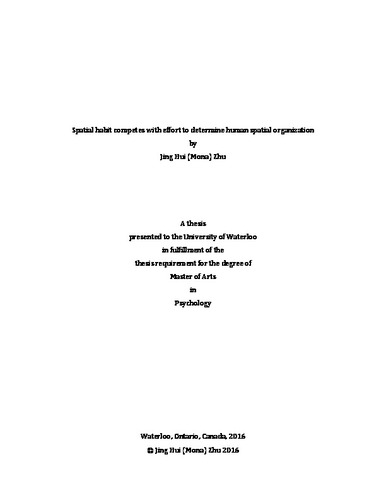 Despite the important role that the physical environment plays in shaping human cognition, few studies have endeavored to experimentally examine the principles underlying how individuals organize objects in their space. The current investigation examines the idea that humans organize objects in their space in order to minimize effort or maximize performance. To do this, I devised a novel spatial organization task whereby participants freely arranged objects in the context of a writing task. Critically, the frequency with which each object was used was manipulated to assess participants’ spontaneous placements. In the first set of experiments, participants showed a counterintuitive tendency to match pen pairs with their initial placements rather than placing pens in the less effortful configuration. However, in Experiment 2, where the difference in physical effort between different locations was increased, participants were more likely to reorganize the pens into the less effortful configuration. The current experiments suggest that the observed initial bias may represent a kind of spatial habit formation that competes with effort/performance considerations to shape future spatial organization.