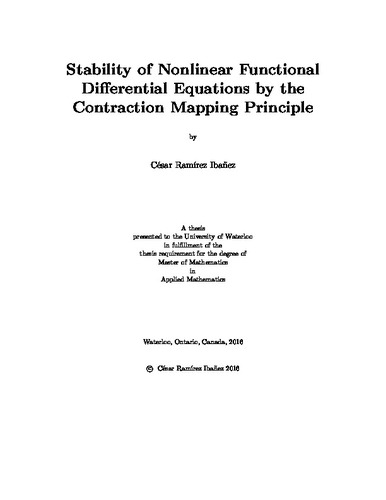 Fixed point theory has a long history of being used in nonlinear differential equations, in order to prove existence, uniqueness, or other qualitative properties of solutions. However, using the contraction mapping principle for stability and asymptotic stability of solutions is of more recent appearance. Lyapunov functional methods have dominated the determination of stability for general nonlinear systems without solving the systems themselves. In particular, as functional differential equations (FDEs) are more complicated than ODEs, obtaining methods to determine stability of equations that are difficult to handle takes precedence over analytical formulas. Applying Lyapunov techniques can be challenging, and the Banach fixed point method has been shown to yield less restrictive criteria for stability of delayed FDEs. We will study how to apply the contraction mapping principle to stability under different conditions to the ones considered by previous authors. We will first extend a contraction mapping stability result that gives asymptotic stability of a nonlinear time-delayed scalar FDE which is linearly dominated by the last state of the system, in order to obtain uniform stability plus asymptotic stability. We will also generalize to the vector case. Afterwards we do further extension by considering an impulsively perturbed version of the previous result, and subsequently we shall use impulses to stabilize an unstable system, under a contraction method paradigm. At the end we also extend the method to a time dependent switched system, where difficulties that do not arise in non-switched systems show up, namely a dwell-time condition, which has already been studied by previous authors using Lyapunov methods. In this study, we will also deepen understanding of this method, as well as point out some other difficulties about using this technique, even for non-switched systems. The purpose is to prompt further investigations into this method, since sometimes one must consider more than one aspect other than stability, and having more than one stability criterion might yield benefits to the modeler.